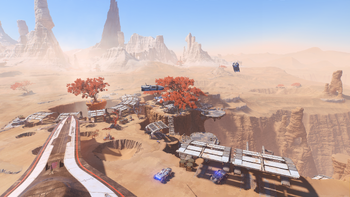 Paradise Sands refers to the expanse of desert surrounding the local watering hole The Paradise on Elaaden. It includes all artificial structures adjacent to Paradise itself, and serves as the Tempest's initial landing zone on the world.

Initially sporting a heat hazard like the rest of the moon, there's no shade in the area apart from the buildings, a few trees, and a Forward Station north from the Tempest. The water tanks in Paradise Sands belong the the merchant Annea, who deliberately placed them close to the cliffs as a psychological deterrent from theft.

There are a few nodes of fluorite scattered about on Paradise's territory. Farther out into the sands, there are mining zones rich in element zero, graphite, and iron.

Retrieved from "https://masseffect.fandom.com/wiki/Paradise_Sands?oldid=516822"
Community content is available under CC-BY-SA unless otherwise noted.