The Pariah is an Outlaw unit. She's one of the mid-tier enemies in Outlaw formations, with one or two of them typically accompanying a group of Raiders and Sharpshooters.


ANALYSIS:
A heavily armored, close-range combatant who uses biotics to create a shield and attempt to flank. 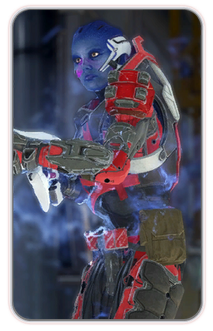 Even without military training, rogue asari are exceptionally dangerous, as their natural biotic talents mean they are never truly disarmed. These pariahs now sighted in outlaw bands wield their powers in pursuit of plunder and glory.

Pariahs attack at short range with shotguns designed for asari commando forces, wearing down kinetic barriers in preparation for a biotic-focused attack. For more persistent enemies, many pariahs have mastered a deadly "backlash" technique, generating a shield with near-negative mass that accelerates incoming projectiles back at their foes.

Pariahs are armed with Disciple shotguns.

Pariahs possess a moderate layer of shields as well as the Backlash ability to protect themselves from attacks to the front. While their Backlash aegis is up, their speed is reduced but bullets and particle beams shot at them ricochet back at the attacker. Note that the aegis will not block melee.

Retrieved from "https://masseffect.fandom.com/wiki/Pariah?oldid=516093"
Community content is available under CC-BY-SA unless otherwise noted.