Strux insists that Morda is planning a move against the Nexus. We need to visit the krogan colony and check it ourselves. We should look for Ravenor [sic] Brenk.

Prerequisite: Conflict in the Colony

Starts automatically after meeting with Strux in The Paradise on Elaaden.

Head to New Tuchanka north of The Paradise. If this is the first time heading further north, a Forward Station can be brought down right next to the entrance to the colony.

Speak with the Krogan Lookout at the entrance to the colony, and with the help of Nakmor Drack, the guards will let Pathfinder Ryder into the colony.

Before heading down into the tunnels, head north to the area with Barruk and his assistant. Proceed to the west through a large gated doorway to find two vehicles with four krogan standing in-between the vehicles. The right Krogan Vehicle can be scanned for +10

Go to the throne room Edit 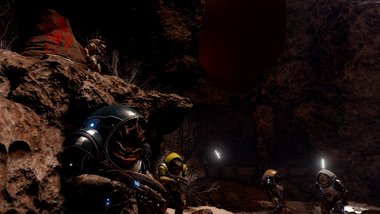 Travel down into the tunnels following the navpoint

and you'll enter a cavernous chamber with a large stone throne.

At the navpoint, you can talk to Ravanor Brenk. Ryder barely begins forming words before being interrupted by Nakmor Morda, the overlord of the krogan in the Heleus Cluster. Morda is hostile towards the Nexus and Ryder, and can't be reasoned with.

Find Brenk and speak to him privately Edit

You can now go and finish the interrupted conversation with Brenk deeper in the cave system. Brenk has gone deeper down in the tunnels and doesn't want Morda to know he's talking to Ryder.

Brenk reveals that Morda is trying to retrieve the drive core from the crashed Remnant ship to build a bomb and use it against the Initiative. However, most of the clans want peace with the Initiative - not war.

When the conversation is over the mission completes and the mission Investigate Remnant Derelict starts automatically.

Around the corner from where Brenk is located, there is an Adapted Initiative Core Tech that can be scanned for +100

Retrieved from "https://masseffect.fandom.com/wiki/Parlay_with_the_Krogan?oldid=516899"
Community content is available under CC-BY-SA unless otherwise noted.