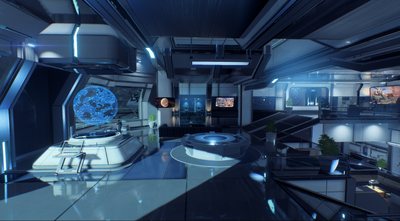 The Pathfinder Headquarters is a location on the Nexus where Pathfinders and their immediate crew may congregate and display important milestones.

The Pathfinder HQ becomes available once Pathfinder Ryder successfully establishes an outpost on Eos. Cora Harper loiters here while the Tempest is docked at the station.

As the Pathfinders from other arks are gradually discovered, they or their replacements can subsequently be found here during their mission downtimes. If all three arks are recovered, the other Pathfinders invite Ryder to HQ for drinks (unless more pressing issues require attention first).

The headquarters is multi-leveled with the lowest level containing a secretary desk adjoining the door to the rest of the Operations wing. Beside the secretary desk is a waiting lounge for receiving visitors. The middle tier contains several display cases with scannable objects and holographs documenting the exploratory accomplishments of the Milky Way races. The upper tier contains the Andromeda Initiative director's desk now occupied by Director Jarun Tann.

The glass case near the stairs houses a rock collection from Luna, Mars, and the salarian Jaeto colony. The memorial nearby features the holographic outlines of Pathfinders confirmed to have died or lost in the line of duty, as well as a short dedication. The planetary holo displays viability levels for extant golden worlds and progress towards raising more AVP.

The three ship holograms on display are starships deemed important to the history of space travel: THV Ravuna, ESAV Majriti, and the SSV Normandy SR-2. The other glass case in the area contains prototypes for the Pathfinder armors.

On a coffee table on the middle tier:

Retrieved from "https://masseffect.fandom.com/wiki/Pathfinder_Headquarters?oldid=523622"
Community content is available under CC-BY-SA unless otherwise noted.