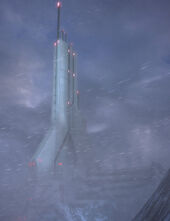 One of seventeen remote facilities on Noveria, Peak 15 is a large research station in the Skadi Mountains, accessible through the winding Aleutsk Valley. Port Hanshan normally runs shuttles there, but in inclement weather, a Mako or M29 Grizzly can be used. The labs there are currently rented by Binary Helix, and according to Lilihierax, the lab has a bad reputation.

Peak 15 has a safety system called Code Omega which is activated if there is a critical containment failure. The facility shuts off power, hoping the cold will deactivate or kill any escaped experiments, and Mira (the VI that runs Peak 15) is purged from the system. Back at Port Hanshan, the executive board then votes whether or not to destroy the facility from orbit, with an antimatter warhead from one of the orbiting battle stations. 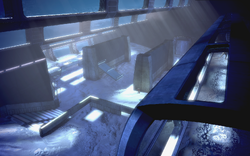 The main garage appears to handle cargo-carrying ground vehicles, likely those carrying heavy lab equipment. A gantry leads to a security checkpoint with turrets that face inward—the corporations protect their secrets even at the cost of their employees. Beyond that is the mess hall and offices, with an elevator to Central Station. 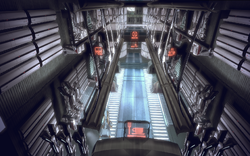 This contains Mira's core, roof access, and the entrance to the massive helium-3 reactor core. A tram station with a heavily-armed decontamination chamber allows connections to Rift Station. In cases of biological contamination, the chamber's plasma jets can be activated, destroying any harmful contagions instantly.

This is the main scientific area. The central floor houses staff barracks, the canteen and maintenance; most of the science staff can be found here. An elevator leads down to several small research labs and secondary maintenance access. A set of stairs leads to the medical bay.

An elevator from Rift Station—and a tram if the tunnels aren't contaminated—connects the station with the hot labs, a special facility built into a stable glacier. Like most facilities on Noveria, the hot labs are designed to reduce any risk of escaping 'contaminants'. In the event of a breach, the exterior of the labs can be heated to sink the whole facility into the ice, earning their name. The hot labs are also equipped with a neutron purge system that unleashes lethal radiation to kill any living creature and sterilise the area.

Retrieved from "https://masseffect.fandom.com/wiki/Peak_15?oldid=516762"
Community content is available under CC-BY-SA unless otherwise noted.