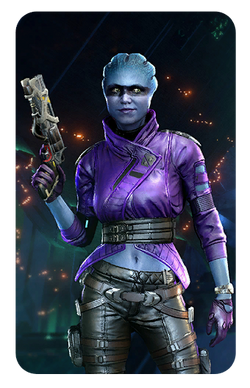 Peebee has asked you to meet her at the museum on Aya.

An email is received after meeting Peebee in her Nexus apartment. Note: It's possible to talk to Peebee directly at the museum instead of reading the email, though this will simultaneously acquire and finish the mission while causing the relevant subsection below to be marked [FAILED].

Acknowledge the email to obtain the next objective.

Talk with Peebee at the museum on Aya Edit

Head to the Repository of History on Aya. Speak with your squadmate.

Ryder asks if Peebee is getting to know the new neighbors. She's "sort of" in the process of getting to know them. That "the angara sure do have this rich culture blah blah blah." You then realize she looks "sauced" and inquires as to what her poison is. Peebee imbibed something a local bar but it seemingly didn't have the punch she was used to. The drink must have a slow absorption rate.

The museum reminds her of her indentured service days as a student on Hyetiana. She expresses frustration at how the angara have already done extensive research on the Remnant and she doesn't like following in someone else's footsteps. Ryder then comments on how the angara haven't seen the things that they have seen. Peebee bets no one here has ever outrun an ancient purification field, or spat in the face of the Archon.

She admits that she's been feeling off ever since she moved out of the Nexus, though she promises to get over this lickety-split. You can then encourage her, and she responds with how attractive you are. She thinks that she'll stay in Ryder's operation a little but longer.

The mission then ends.

On your return to the Tempest, Dr. Suvi Anwar says that Peebee wants to speak with you. Peebee seems stressed out, and says that she always used a zero-G chamber or similar before to relax. SAM suggests turning gravity off in the escape pod, and Peebee invites Ryder for the experience. The two enjoy a few moments drifting.

She then offers you a chance to "blow off steam" together - no strings attached. Any other romantic partner of Ryder doesn't need to know. To pursue a romance with Peebee, you should either accept her offer or say they want strings attached.

Retrieved from "https://masseffect.fandom.com/wiki/Peebee:_The_Museum_Trip?oldid=515396"
Community content is available under CC-BY-SA unless otherwise noted.