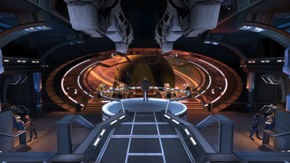 Pinnacle Station is the second downloadable content pack for Mass Effect, and was developed by Demiurge Studios.[1] It was released on August 25, 2009 for 400 MS points on Xbox Live or 400 BioWare Points on the PC. The pack adds a unique training facility to the Galaxy Map, the Pinnacle Station. It was included in the PC edition of the Mass Effect Trilogy; the PlayStation 3 port does not include Pinnacle Station due to the source files being corrupted.[2] It is also not included with Mass Effect Legendary Edition for the same reason.[3]

Pinnacle Station is one of two DLC packs released for Mass Effect. The other is Bring Down the Sky.

Test the limits of your combat prowess aboard a remote, top-secret Alliance space station. Do you have what it takes to hold the top spot among the best of the best? This module includes a new land-able space station, 13 exciting combat scenarios, and approximately 2-3 hours of game play.

Compete in a series of high-stakes battle simulations to earn amazing weapons and armor that can be used in the main game. Unlock new achievements, and even win ownership of a dedicated base of operations for Commander Shepard. Challenge modes include Survival, Time Attack, Hunt and Capture and even a scenario modeled after the First Contact War.

At some point between the original release and the subsequent release of the PS3 version (and the later Mass Effect Legendary Edition), BioWare's source code archive for the DLC was discovered to be corrupted; the backups of the original developer Demiurge Studios were checked as well and also discovered to be mostly unusable. In an interview Mac Walters from the MELE team described an "emotional rollercoaster", and said that "It would basically take us another full six months just to do this with most of the team we've got. I wish we could do it. Honestly, just because this is meant to be everything that the team ever created, brought together again - all the single-player content. And so, leaving it all on the cutting-room floor, it was heartbreaking."[3]

This should allow you to use both DLC packs properly.

Pinnacle Station is available for $4.99 on Xbox Live.

For PC, it is accessible free at: