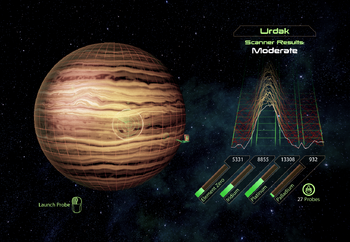 Scanning is a new system in Mass Effect 2 that replaces driving with the Mako and searching for the minerals inland, from the first game. Scanning becomes available when the Normandy SR-2 enters the orbit of any planet not involved in a main storyline mission, at which point you'll be prompted to start the scan. Once begun the planet will be overlaid with a rectangular grid. You may then press and hold another button to begin a mineral scanner which is slower than the main scanner, though its speed can be upgraded slightly. A data column will appear on the side of the screen and you then move the scanner around until the data column spikes, indicating the presence of minerals at the scanner's current location. You may then fire a probe at the deposit which will in turn add the minerals to your stores.

There are several levels of mineral abundance for a planet. Each planet will start out at a certain abundance, which will decrease as minerals are successfully harvested.

Resources are required to complete research projects that upgrade weapons, equipment, and the Normandy. Resources are found by scanning, probing and mining planets in the galaxy. There are four kinds of mineral resources in Mass Effect 2.

Scanning can also be used to discover loyalty missions and N7 assignments on certain planets. Upon entering orbit, EDI will tell you she has detected an anomaly. Then, once you start scanning the planet, there will be a white line pointing at the direction of the mission. When you find a small white blip, you then launch a probe at it. At this point you can go onto the planet to do the mission. For planets with speech-based radio transmissions, the repeated speech fragment will become clearer (less muffled) the closer the scanner is to the location of the blip.

Two upgrades may be purchased that directly affect the planet scanning process. One upgrade doubles probe capacity from 30 to 60; the other upgrade allows the scanner to move more quickly, speeding up the process.

The table below shows the total amount of each resource needed to buy every upgrade in the game. The second column shows how much is needed if all available resources are collected from missions and assignments. The third column shows some convenient places to "top up" a particular resource - all of which are available from the beginning of the game.

You may find Element Zero on planets where it is listed as None, as each planet has a random number of low value deposits. While there are general rules and assumption for mineral distribution, do not assume that every planet of the same type will give up the same minerals.

Here is a list of all of the "hidden" N7 Assignments, grouped by star cluster and availability for maximum convenience in traveling about the galaxy.

A rich resource is 10,000 or more of that resource possible to be gathered. The following list shows the Planets with a specific 'rich' resource and other resources. If you need a lot of one particular resource, try these planets: