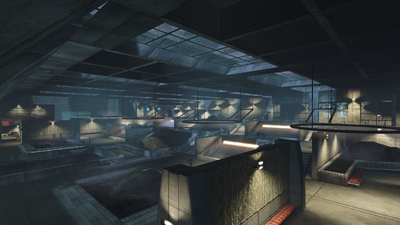 Port Hanshan is the capital of Noveria, owned and operated by the Noveria Development Corporation (NDC). Given Noveria's notoriety as a corporate haven for the conducting of ethically dubious, controversial or dangerous research, Port Hanshan's security is near unbreachable, in an effort to discourage dissent, espionage or outside interference. Unexpected visits are met with aggressive suspicion, and, even when permitted to land, the impounding of vessels is rigorously enforced.

The NDC retains the services of one of its member corporations, Elanus Risk Control Services, as a private security and administration force to enforce containment as well as to protect the many facilities and corporations of Port Hanshan.

As the Noveria Development Corporation is not a member of the Citadel, Noveria is not considered part of Citadel space, and therefore is not subject to Council oversight or regulations. However, the NDC has a standing arrangement with the Citadel which allows Spectres on official Council business access to the planet, much to the dismay of the corporations that maintain facilities on Noveria.

Port Hanshan is overseen by an Administrator, acting on behalf of the Board of Directors of the Noveria Development Corporation. As of Commander Shepard's arrival at Port Hanshan, the administrator was Administrator Anoleis.

The Administrator's position of authority can be easily abused. The Administrator's office is often a hotbed of bribery and corruption, the only unbreakable rule being "don't rock the boat". If the boat is rocked, however, and costs the NDC valuable business, the Board of Directors has full access to an internal affairs bureau to investigate and arrest the offender.

Multiple private corporations maintain office facilities accessible from Port Hanshan's plaza level, including the notable Synthetic Insights corporation, one of only four licensed for legal AI research. On the left, past the elevator, are the heavily guarded Administration offices. The plaza is also home to an emporium owned by the hanar merchant Opold. 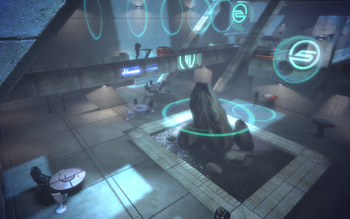 The mezzanine level is home to Port Hanshan's hotel - for corporate account holders only - and attached executive lounge and bar. Commander Shepard can meet several people of interest here upon arrival. Mallene Calis is lingering near the door watching Rafael Vargas, and Lorik Qui'in is seated at a table not far from her. Shepard can overhear two humans in conversation: a woman is describing her new employment contract, while her male friend mentions a ski resort that is being planned at Noveria's equator.

Upstairs is a security subjunction that links to the Synthetic Insights offices. One of the terminals here may contain data concerning an offworld doctor in danger. Close to the door, the krogan bounty hunter Inamorda is having a drink, which he growls "Human blood! With cinnamon" when pressed. He isn't interested in chatting unless it's about Opold's shipment. A seated salarian is also nearby making a 10 credits/minute call to his elder brother, which provides more information about the situation at Synthetic Insights (often phrased in salarian idioms), as well as Administrator Anoleis' full name.

In the lower levels is a garage complex, designed to allow ground-side vehicular travel around the planet's surface, as well as access to outlying facilities such as Peak 15. Access to the garage is restricted: only managers and those with clearance are permitted to leave. The Port Administrator monitors all events and enforces company protocols and procedures from the Administration office positioned near the primary elevator leading to and from the port's docking bays. Lilihierax, a turian mechanic loitering just outside the garage, can apprise Commander Shepard of current events within Noveria.