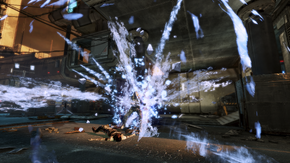 Power Combos are a gameplay element introduced in Mass Effect 3, expanding on the Warp detonations of Mass Effect 2. By attacking an enemy with two powers in sequence, the combined effects of each power can result in an explosion. All power combos require two different varieties of powers be used: a source and a detonator. The source power determines which of the four power combos will be triggered, and the detonator triggers the combo and causes the explosion.

An enemy is visibly "primed" for a combo when they glow a certain color/texture, which corresponds to what combo they have been primed: violet for biotic, red for fire, electric sparks for tech, and a white "chill" effect for cryo. Not all enemies display this texture for whatever reason; for example an Atlas primed for a fire explosion will not actually glow red.

The priming duration varies from power to power. Some powers prime for only a short period of time (such as Overload or a Sabotage backfire), some powers prime for an extended period of time (such as Warp). Powers with durations may prime for their full duration (such as enemies lifted by Singularity) or a fixed subset (Sabotage's Tech Vulnerability evolution will not extend the priming duration to 10 seconds, for example). It should be noted that the passive class powers which increase power duration do not affect the priming duration of powers which do not prime for their full duration such as Incinerate with rank 5 Burning Damage, or powers with no duration such as Overload.

Some powers have caveats for successfully priming or detonating. For example, Energy Drain cannot be used to detonate organic targets which lack shields/barriers and in single-player, Singularity will not prime enemies that are not lifted. In multiplayer, Lash will not prime or detonate an armored target. Incendiary Rounds will not prime an enemy while it is being protected by shields or barriers. Additionally, some powers must be evolved in a certain way in order to make them able to prime and/or detonate power combos.

Generally speaking, powers with areas of effect can prime multiple enemies at once. However, aside from a small number of exceptions (Overload, Shockwave, Smash, Biotic Slash, Electric Slash and Biotic Sphere) only one enemy can be detonated at once. Moreover, detonations will not set off other combos.[1]

Some powers can be both sources and detonators, but any combo must be composed of a different source and detonator, for example, you cannot detonate Warp with another Warp, but Reave and Warp will detonate each other in any order. Once a source has been applied, it can only be detonated once. This is true even if the source power has a damage over time effect that is still active after the power combo. Area-of-effect powers can set up multiple combos (one on each affected target), but typically can only detonate one combo per use, or per projectile launched if more than one (e.g. single-player Throw or Cluster Grenade). The specifics and "exceptions" are covered in the next section.

When working with mixed power types (biotic/fire/ice/electricity), it is often more effective to adopt a strategy of "prime-prime, detonate-detonate" or "prime, detonate+prime, detonate" instead of "prime-detonate, prime-detonate". Understanding this allows power combos to be done more efficiently and/or with fewer power uses. Though the concept is fairly simple, memorizing the Source Powers/Detonator Powers charts below is necessary to take full advantage of this technique.

An enemy can be primed for 2, 3 or all 4 types of power combos at once but only 1 of each type at a time. Each primer can then be set off, back to back, by a sequence of detonator powers. Despite the enemy visuals often suggesting the contrary, the addition of a different primer type does NOT erase the previous one(s), nor will it fail to prime if another type is already present; instead, the different types form layers.

The order in which the primers are applied will affect the sequence in which they are detonated; it follows a reverse chronological order, provided the detonator used is capable of causing that type of explosion. If it cannot, then the detonator will work its way backward until it finds a primer it can detonate but will not erase the primers it skipped.

For example, a Warp-Throw biotic with incendiary rounds/ammo can trigger 2 power combos in 3 moves by: shooting the enemy, using Warp, then Throw. Warp will simultaneously cause a fire explosion and prime for a biotic explosion, which Throw will then detonate. This biotic could perform the same 2 explosions in a slightly slower, but more damaging manner by opening with Warp and taking advantage of the Pierce and Expose evolutions. In that case, the biotic would start with Warp, shoot the enemy (causing it to be double primed for a biotic and fire explosion), then use Throw two times in a row.

Enemy glows (or lack thereof) do not always reflect what primers the target is carrying or what the most recent one is; keeping track of which powers have been used and which explosions have occurred is difficult but necessary. As in the previous example, when Warp is used to detonate a non-biotic explosion, the enemy may not glow violet afterwards despite being primed for a biotic explosion.

If multiple priming powers of the same type hit a target, only the most recent one can be detonated. With the exception of Warp-Effect Biotic Sphere, if the detonator is also a source and of the same type as the source, the enemy will not be primed after the power combo. If the detonator power is also a source and of a different type than the source, the priming aspect of the detonator power will be applied to the enemy after the power combo. For example, Overload and Energy Drain will not prime for a tech burst if they detonate a tech burst just as Incinerate and Carnage will not prime for a fire explosion if they detonate a fire explosion; they will prime normally if they detonate a power type different than their base. As such, Carnage, Incinerate, Overload would only yield a single fire explosion but Carnage, Overload, Incinerate would yield a fire explosion and then a tech burst.

If this concept is taken to the extreme, with a synergistic set of powers, it is possible to have the number of explosions on a target be equal to one less than the total number of powers used. This is achieved by alternating powers of different types that are all primers and can detonate each other in any order. Doing this with a team is easier and gives a much bigger variety but there are a handful characters that can do it alone.

The following is not a comprehensive list; they are merely examples of synergy with different power types. As noted before, many tech powers have a short priming duration so if too much time passes between consecutive powers, the primers will wear off and the examples below will not work as described. Fast recharge speeds and/or additional teammates are necessary.

Note: In the lists below, powers marked with an asterisk (*) have rank evolutions that can increase biotic explosion, tech burst, fire explosion, or cryo explosion damage. This increases the effective level of the power by at least 50%, whether used as source or detonator, with damage bonuses stacking if both powers have the applicable combo damage-increasing evolutions.

All power combos have a "base" damage based on the combo level, which is simply the total power level of the source and detonator. The base damage ranges from 100 (for a minimum combo level of 2) to 250 (for a maximum possible combo level of 12). Note that for purposes of combo levels, multiplayer Ammo Bonuses always count as rank 1 powers. This is in contrast to single-player ammo powers, which use their respective power rank for the sake of calculating combo level. This base damage is then multiplied by a factor dependent on the game's difficulty, scaling with enemy health.[2]

Note that this scaling means that, as difficulty levels increase, the relative importance of combos for a power-based class's damage output increases dramatically. For example, in multiplayer a maxed-out combo will do only 375 damage on Bronze but an astounding 1,096 on Platinum. This also has the ramification that while ammo powers may be useful from a single-player/solo perspective for priming/detonating combos at will, it can severely reduce the total damage output of a power-heavy party in multiplayer.

The combo damage is further modified based on its type and on whether it is damaging armor, shield, barrier, or health as noted below (e.g. tech bursts do 2x damage to shields). Any debuffs on the target receiving the combo (such as Sabotage's Tech Vulnerability) will also affect the combo damage, if applicable.

Biotic explosions cause a wave of biotic force that damages and knocks back enemies. These combos can be triggered without killing an enemy.

Biotic explosions have a radius of 2 to 4 meters.[3]

Cryo explosions create a blast of ice that deals severe damage to the primary target and may freeze nearby unprotected enemies (no armor, shields, or barriers). Cryo explosions can be triggered without killing an enemy, although in most cases, the enemy must be frozen solid in order to do so. Enemies killed by cryo explosions shatter without leaving a corpse.

Cryo explosions have a radius of 3 to 5 meters. Even if enemies in the radius are not frozen or damaged, they are still chilled and have their movement slowed by 30%.[5]

Snap Freeze has an apparent bug where cryo explosions that use it as its source do twice normal damage.[6]

Tech bursts create a blast of electricity that inflicts severe damage on the shields and health of nearby enemies and has a chance of stunning them. Tech bursts can be triggered without being a killing blow.

Fire explosions create a blast of flames that inflicts severe damage against the armor and health of nearby enemies and may also set them on fire, though this is mainly cosmetic and does not apply extra damage. Fire explosions required that enemies be killed to trigger until Patch 1.04 removed that requirement. Lesser enemies used as a source for fire explosions are instantly vaporized without leaving a corpse.

Fire explosions have a radius of 3 to 6 meters.[8]

In the table below, the columns marked Biotic/Cryo/Tech/Fire indicate whether the ability can detonate primed biotic explosions, cryo explosions, tech bursts, or fire explosions respectively. Underscore indicates whether a power has a multiplier evolution which increases the effective combo level of the power for the purposes of the combo type indicated by the column. These evolutions increase damage by at least 50% regardless of whether the power is used as source or detonator, and whether it is stacking with another power with such a multiplier.

Retrieved from "https://masseffect.fandom.com/wiki/Power_Combos?oldid=519160"
Community content is available under CC-BY-SA unless otherwise noted.