Presrop is the moon of Klendagon. It is a frigid, barren world, with an extremely thin atmosphere of carbon dioxide and ethane. The crust contains plentiful deposits of heavy metals. The Alliance has opened bidding for the moon's mineral rights, but exploitation will be complicated by the system's proximity to the "Five Kiloparsec Ring" around the galactic core. The Ring is an area of intense star formation, and too dangerous to safely travel.

Presrop's landscape is a nightmare of jagged, overlapping ridges and geological shock zones created by some ancient disaster. This has not deterred a generation of illegal "wildcat miners" from attempting to exploit the moon's mineral riches. Unfortunately, many have lost their lives. 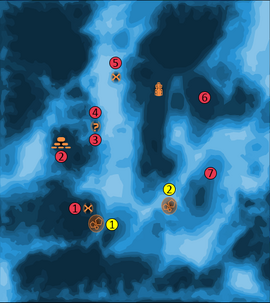 Presrop's operational area has a very light hail of particulate matter. Navigating the terrain may require significant amounts of time climbing through sheer mountain cliffs in order to reach points of interest, though the top of these cliffs are generally stable enough for near-smooth Mako traversal.