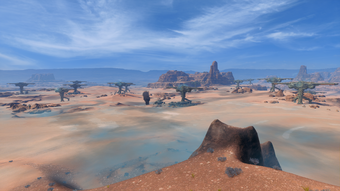 The Presson Dunes dominates the area west to northwest of Prodromos. Numerous T-shaped kett structures dot the landscape, which appear to be siphoning off bluish-green gas that's endemic to the region.

There are also a few kett bunkers and barracks here. The aforementioned structures, plus the base at The Sheartop nearby, may lead Pathfinder Ryder to conclude the kett have built a stronghold on the planet.

According to Grace Lito, naming it "Presson Dunes" was August Bradley's idea: "Because [they] have to press on."

Retrieved from "https://masseffect.fandom.com/wiki/Presson_Dunes?oldid=520589"
Community content is available under CC-BY-SA unless otherwise noted.