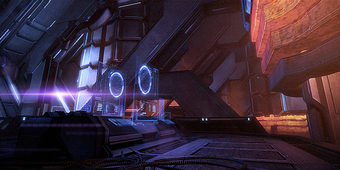 The quarians have tried to retake their homeworld from the geth. Unfortunately, the geth have been upgraded by the Reapers, and the quarian fleet is trapped. Travel to the quarian home system and disable the geth dreadnought broadcasting the Reaper control signal.

This mission is automatically acquired after the meeting with the quarian admiralty.

Tali'Zorah vas Normandy is a mandatory squadmate for this mission, unless she died in Mass Effect 2 (during the Suicide Mission or because she was never rescued from Haestrom), in which case Admiral Xen will guide you through the mission but will not be a squadmate. Tali has Energy Drain, which might just save your life on this mission, and Sabotage, which temporarily hacks any synthetic into fighting for your side.

Since this mission is aboard a geth ship, you will only face synthetics. Spam Sabotage and you'll basically have a four-person squad all mission long. Regardless of whether you have Tali with you, assessing your team's reactions about geth and the ability to produce tech bursts often are considerations to think about when choosing who to bring with you. Squadmates with anti-shield capabilities, Kaidan or Ashley (depending on which one of them is alive), EDI and Garrus make good choices here. If you have it, Disruptor Ammo, Overload, and similar anti-shield powers will be useful.

If you have it as a bonus power, consider equipping Energy Drain on yourself as it can both drain geth shields and restore yours. Alternatively, equipping Defense Matrix and keeping it up throughout the mission will give you an instant shield restore: you will navigate through geth-filled areas of the dreadnought that are very damaging to shields.

Make your way through the ruins of the docking tube alone. If you've played Mass Effect 2, you'll find the spacewalk sequence reminiscent of Prologue: Save Joker: you can only walk slowly and move your camera around. In addition, since you're in a circular tube, you'll be plodding your magnetized boots along the inner ring to navigate through obstacles, which may result in a mild case of disorientation. The walk won't take long and is not overly complicated, opportunities to banter with associates arise at three moments to relieve the boredom: when looking at the profile of the dreadnought, when looking up (or down) at Rannoch, and about 3/4ths of the way down the tube.

Once you've reached the end the tube will detach, leaving you separated from your squad and the Normandy. Enter the Geth Dreadnought. Proceed down and to the left to grab a Shotgun Smart Choke, then climb back up the ledge and circle to the right to get to a ladder directly across from where you came in. Once you have climbed up the ladder, go right and through the door. In this new airlock there's 1875 credits ("Geth Data") to the left, and your goal up another ladder on the right. Activate the controls, and a cutscene will play. Pick up the Arc Pistol before continuing; it's next to the docking controls where Tali left it during the miniature cutscene.

You will enter the geth defense network. Move along the linear path, grabbing GARDIAN Defense Data and a Sniper Rifle Enhanced Scope, and activate the bridge controls. Eliminate all geth hostiles and move forward and down a ladder. You will find more geth troops at the bottom.

Once they have been eliminated, move along the path and through the door, but be careful advancing: there are Trip Mines on the floor. They can be shot to cause premature detonation, but they blend in pretty well. To conserve ammo, a better tactic is to activate them then perform a combat roll backwards to get out of its blast radius. This is also handy if you trip one by accident; roll backwards the moment you hear the Trip Mine activate. One can also use powers to set them off from a distance; Shockwave is one such power that works for this purpose. Grab more Geth Data (+2500 credits) before passing through the next door, which leads to a room with the Archon Visor in it, plus two sensor consoles that will update you on the progress of the battle; the room beyond it contains a network console and the Geth Pulse Rifle. Finally, you will arrive at the Operations Center where Tali intends to shut down the Reaper signal. 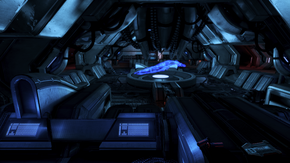 Of course, the Operations Center is manned, particularly by Geth Hunters, who use optical camouflage to sneak up on you and decimate you with their shotguns. They can only maintain invisibility while their shields are active, and the invisibility isn't perfect: if you catch the slight visual distortion, shoot it to make it targetable. Powers can also be used for this, such as Overload or Tali's Energy Drain, however you must aim them precisely on the cloak distortions to land hits as you can't lock on to them while they're cloaked.

Combat Tips: This first encounter with Hunters is quite dangerous especially on higher difficulties, as three of them will be closing rapidly on your position from multiple directions and at least one can be on you within a few seconds (usually from the left). Manually order your squadmates into nearby cover immediately as they have a tendency to run forward straight into the Hunters' shotguns after the cutscene. Tali's Defense Drone is a fairly effective tool against Hunters as it will instantly zap and stun a Hunter in range the moment it decloaks to attack, so be sure to activate it if available the moment the fight starts. Using Sabotage to hack any of the other geth in the area is also a good idea to keep extraneous threats off your back while you focus on eliminating the Hunters. Helpfully, your squadmates will call out if there are still any Hunters active in the area.

Once everything's dead, move out, being wary of Trip Mines. Grab the SMG Scope and Geth Data (1250 credits). You can also examine a Data Console near the middle of the room before activating the target console. Tali will inform you that you need to get to the drive core to accomplish your mission. Tali will then open the maintenance tubes and geth will flood inside, including up to four Hunters. Eliminate the hostiles and proceed to the back left of the operations center to enter the maintenance shaft. Bypass the door, then go around left to go down the ladder. Continue around and drop down a second ladder. Pick up the Geth Data (1250 credits) on the left, and go down another ladder. Finally, pick up the med kit and head through the pair of doors into the Main Battery. 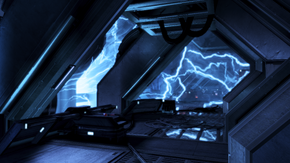 This space is where the dreadnought's titanic main gun resides. Every time it fires, an electromagnetic shockwave will come screaming down and disable your shields unless you're in cover. Get used to the timing; you're going to spend a lot of the remaining mission in this corridor. Fortunately, the shockwaves are pretty obvious, and furthermore "in cover" just means "using a chest-high wall," not, "actually ducking." If you've popped out from cover to shoot, the shockwave will not hit you. This is also why Energy Drain is an excellent bonus power to carry around in this mission: not only does it help you deal with the Hunters and Geth Rocket Troopers, it can provide a quick shield boost if you're accidentally snagged by a shockwave.

Two waves of geth will appear the moment you enter the corridor. It's possible to just stay put and let both waves come to you; if you'd like to be more aggressive, a raised control post to the right offers flanking potential. In any case, your squadmates will tell you when it's safe to move, at which point you should head up the hall and take a left to find a maintenance lock. A small ramp to the left, just before the maintenance lock, has some geth data you can salvage for 1250 credits. Once you've activated it, you'll want to sprint. Dawdling inside the maintenance lock for too long will result in the electrical shockwave frying you and resulting in the game over screen. 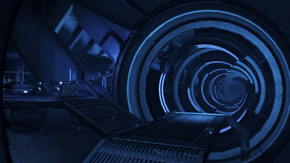 You are now on the opposite side of the main battery, but the shockwaves haven't finished yet.

You'll almost immediately be engaged by the geth. If you go straight forward from where you start, you can take a ramp to a catwalk where the geth are shooting down at you from, but this exposes you to a lot of fire very quickly.

Alternatively, you can turn right from your starting point and take a ladder up to the other side of same catwalk, but the same problem occurs. You'll have to climb up eventually, though, because the way forward is a ladder on the far side of that catwalk. Clear the area and advance all the way to hit a dead end. Take the ramp on your left up to another control post, which has a locked door perpendicular the main cannon.

Bypass the door and go through a second door to reach the elevator platform area.

Before using the elevator platform, go around the outside to the right for more geth data (1875 credits).

Move onto the platform and access the platform controls. A miniature cutscene will be triggered as you and your squad progress upward, showing two geth with ML-77 Missile Launchers. They will shoot the bottom of the platform, causing it to collapse. Sprint forward toward Tali before it collapses completely, and she'll help you up. Loitering there for a while for whatever reason will cause the platform to collapse, taking you with it and resulting in the game over screen.

Proceed up the ladder, collect and go past a med kit, and go through the door to enter the drive core. A cutscene will be triggered. The drive core will reveal the hardware the Reapers are using to distribute their control signal: Legion (or a "Geth VI" if Legion is absent), who will shut down the signal if you release them. 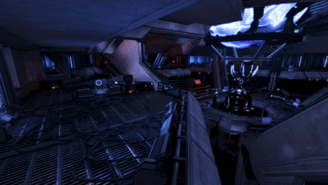 Grab the Assault Rifle Precision Scope and geth salvage (2500 credits) and then take either the platform or the ladder up to the top. If you took the ladder move around the outside to the data core override. Access the panel to free Legion or the Geth VI, who will then shut down the dreadnought's drive core.

Multiple enemies will drop in shortly afterward, including Geth Primes. These hulking robots are heavily armored and shielded and their cannons deal heavy damage at range and are very good at suppressing you; they can also summon drones and turrets. Tali's Sabotage is once again invaluable here: converting a Geth Rocket Trooper, Geth Hunter, or even a Geth Prime into a temporary ally creates the space you need to thin out the enemy ranks. There is very little spare ammo to be found in this fight, so be efficient and make good use of powers and your squad.

Eliminate all hostiles and proceed back around the half-circle balcony to get to the ladder. From here, you're basically in the clear. You can take your time to look around; the ship will not explode with you in it. Move through the linear path until you reach the hangar. The walkway will collapse beneath you. Run up the ramp to your geth friend to end the mission.

Retrieved from "https://masseffect.fandom.com/wiki/Priority:_Geth_Dreadnought?oldid=526157"
Community content is available under CC-BY-SA unless otherwise noted.