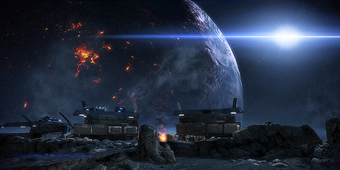 Primarch Fedorian of the Turian Hierarchy has called a war summit that presents an opportunity for the Alliance to request help building the Crucible. Unfortunately, Fedorian was caught in the Reaper attack on Palaven. Rescue the turian primarch from Palaven's moon.

Prerequisite: Priority: The Citadel I

Note: Even if you completed Priority: Eden Prime before this mission, Javik cannot be brought along to Menae. This also applies to N7: Cerberus Lab, the only other mission available at the beginning besides Javik's recruitment mission and this. 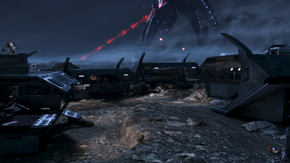 The Kodiak will fly over the camp, opening its doors in mid-flight. Accurate players will be able to shoot husks off the cliff, severely reducing the amount of enemies when you land. Clear them all out and talk to the turian soldier to get directions. Scan the spare parts on the right just past the soldier for 1250 credits. Before continuing down the path, climb up to the building you see in front of you, and walk up to the edge. Liara and James will have a brief dialogue about the Reaper in the distance. Continue up the path and pass through the gate. On the left is a med kit (100 XP). Just ahead in the center of the base is a datapad (1875 credits) and the M-97 Viper; to the right of those in the structure is another datapad (75 XP).

Go forward from the datapad to the end of the encampment and turn left to see a barrier exit/entryway similar to the one you came through when first entering the camp. Going towards it, on your left will be a piece of metal cover where you can pick up the M-27 Scimitar and the Assault Rifle Piercing Mod. In the nearby enclosure on your left when turning around from these items, you will find the Hahne-Kedar Greaves, a datapad (75 XP), and another med kit (100 XP). Head back towards General Corinthus. In an enclosure on the left you can find a Pistol Piercing Mod, the Armax Arsenal Shoulder Guard, and a Weapon Bench. Finally, in the alcove between you and the general will be another datapad (2,500 credits) and a Pistol Magazine Upgrade.

After picking everything up, talk to General Corinthus. He will tell you that the Primarch is already dead. You need to repair the comm tower in order to communicate with Palaven Command, and learn who the new Primarch is. Head out the back left of the base to where some turian guards will tell you they were overwhelmed by husks while trying to retake the comm tower. Eight husks will now attack you as you approach the tower, but if you return to the turians instead of moving toward the comm tower immediately the turians will help you fend off the husks. Do note that the turian's gunfire will harm Shepard if the Commander is standing in the way, so stay out of their line of fire. 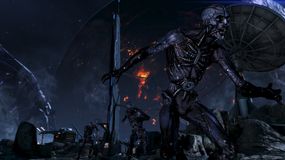 Once the husks are down, head over to the comm tower, where you will have to choose one squadmate to repair the comm tower, while you and the other member defend the position from waves of husks. You'll be facing twenty-eight more husks, without much help, so choose a squadmate remain with you: Liara provides crowd control with Singularity, but James can lay down a lot of damage and can survive melees with husks for longer. Make your choice, and then get ready to fight. One key to survival here is to keep moving - remember that you can always outrun the husks, and that the only truly fatal mistake is to become trapped by them. So run and gun when necessary, and eventually about halfway through your second squadmate will announce the tower is fixed. Shepard will now volunteer to help Corinthus' men with the rest of the husks: you will still have more husks to fight through, but now you have both squadmates, and the turians will reappear on the slopes overlooking the tower to lend a hand. After the rest of the husks are down, Corinthus will call and ask you to return to the base. Note: If you don't want to help fight the husks, you can simply run straight back to Corinthus - he will call you to return as soon as you reach the base gate, allowing you to bypass the rest of the fight.

At this point your old squadmate Garrus Vakarian will make his first appearance. That is, if he survived Mass Effect 2, or if the player is starting a Mass Effect 3 game from scratch. Corinthus will inform you that General Adrien Victus is next in line to become the primarch, and that you have to find him.

Joker will then interrupt, saying that the Normandy's systems are malfunctioning. If Garrus is alive and present, Liara will leave the squad to investigate and he will take her place in your present squad, otherwise Shepard promises to look into the Normandy's malfunctions after the mission. Liara will then stay and fills in for some of Garrus' lines throughout the mission. 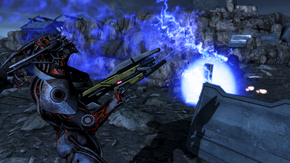 You will be sent out to defend the airfield from Reaper forces made up of more husks and now Marauders. Remember to pick up the Assault Rifle Magazine Upgrade next to the waist-high barriers and the supplies on top of the crates to the right (2500 credits) as you won't be returning to this area.

Following this, Corinthus will need you to defend the main barricade. You will encounter a few waves of husks, but you'll have access to a mounted turret with which they can be taken out quickly. As soon as you take out the waves of husks, you will be forced off of the turret and outside of the base's walls by a Brute supported by a small group of husks. Tip: If you're playing through for the first time and have never faced a Brute, there are two important things to remember. One is to stay as far away from the Brute as possible - it uses melee attacks and charges, so you will want to open up range whenever possible. The second thing to remember is that the Brute's weak spot is not its face but its unarmored buttocks, so shoot the thing right, well, there.

Down the Long Path[edit | edit source] 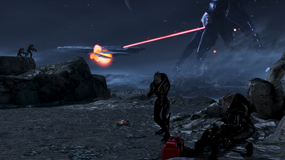 With the Reaper forces neutralized, proceed along the path. After following Garrus around the corner to the right, keep going straight until you see a turian frigate in the distance. James will make a few comments here about the frigate and the Reaper in the distance. Continue to General Victus' last known location. Pick up a datapad on the ground next to some dead turians (1,875 credits) after the visual cue for Garrus to comment on Palaven. On the way, defend against a few husks which will climb up the cliff wall to attack from both in front and behind you. When you get to the soldiers, you will find a med kit (100 XP), another datapad (2,500 credits), and a Sniper Rifle Spare Thermal Clip. Move up to the view of the crashed frigate to have a short dialogue with James and Garrus. Continue ahead to see an aircraft crash into the rocks in front of you. Examine the crash site to learn that there are no survivors. Move along, listening to the exposition, and pick up the med kit (100 XP). 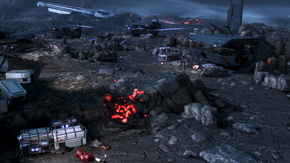 Soon you will see an explosion. Run over there and you'll be met by a group of Cannibals and Marauders, followed by more Cannibals and a Brute. Use the crater as cover and let the enemy come to you. Once they are clear, move further into the compound and look to the right. Marauders and a pair of Brutes appear. But on the right as you come in, just past the first turian "bunker" is a most useful Reaper Blackstar heavy weapon; use it as you wish because this is the last fire-fight. Its immense explosion can take out one or both of the Brutes instantly. Beware that although you will suffer no splash damage, your squadmates can often be caught in the deadly blast. Tip: Another opportunity related to this being the final firefight - use up the rest of James' grenades freely, and your own if Shepard is carrying any.

After the battle, search the area for mods: in this area, directly to the left from where you picked up the Blackstar, you can find a med kit (50 XP). Turn around and face the bunker that is on fire. Head towards it to find another med kit (50 XP), and a Sniper Rifle Enhanced Scope on the far left as you come in. After eliminating all the Reaper forces and acquiring the mod, approach the final ramp or climb up on the plateau to trigger the conversation with General Victus and end the mission. Template:Note: Try not to finish the battle near General Victus if you have not picked up the mod, or the end conversation may trigger automatically without you being able to look around the battlefield after.

You will then return to the Normandy and converse with the asari Councilor and Admiral Hackett.

Retrieved from "https://masseffect.fandom.com/wiki/Priority:_Palaven?oldid=518047"
Community content is available under CC-BY-SA unless otherwise noted.