The quarian fleet offers both technical specialists and support ships to assist with the Crucible. Meet the quarian admirals and obtain their help in the war effort.

After leaving the Citadel, Admiral Hackett informs you that the quarians are willing to aid in the war against the Reapers and tells Shepard to travel to the Far Rim to meet with them. 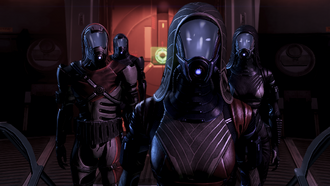 Go to Dholen in the Far Rim to dock with the Quarian Envoy Ship. A cutscene will take place in the Normandy's war room with the Migrant Fleet's admirals. The admirals reveal that they have begun an open war with the geth, pushing them back to their homeworld, Rannoch, when the geth were given upgrades by the Reapers. They request the Normandy's assistance in disabling a geth dreadnought broadcasting the Reaper signal.

If Tali'Zorah survived the events of Mass Effect 2, she will join the team. If she was not exiled by her people, then she will have been appointed as an admiral as well, having taken over for her father, Rael'Zorah. Tali will still appear if she had been exiled because of her knowledge of the geth. Shepard will refer to Tali as their 'dirty little secret' due to the admirals keeping her presence hidden from the rest of the quarians. You will discuss plans regarding Rannoch and the war against the geth with her, and can invite her up to your cabin to speak privately or lock in Romance with her if you are continuing one from Mass Effect 2.

Note: If this is your first ever playthrough of Mass Effect 3 talking to Tali in your cabin will also unlock Energy Drain as a bonus power that you can assign to yourself in the medical bay.