The asari councilor wishes to talk privately about a matter pertaining to the war effort. Meet her on the Citadel.

You automatically acquire this mission after liberating Rannoch from the Reapers.

The asari councilor will contact Shepard on the vid-com immediately upon return to the Normandy, telling them that she has vital information that must be shared in person.

To begin the mission, travel back to the Citadel. Once you have arrived, travel to the Citadel Embassies and make your way to the late Councilor Udina's office. Enter to trigger a cutscene. The asari Councilor will tell you that the Asari Republic has taken a turn for the worse, and will proceed to tell you that a Prothean artifact is hidden in the Temple of Athame on the asari homeworld, Thessia. Once you have been dismissed, the mission will end and you will acquire the mission Priority: Thessia. 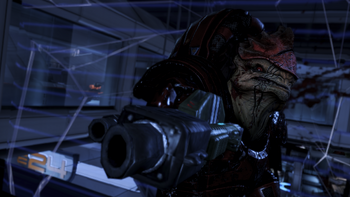 If you sabotaged the genophage cure and if Urdnot Wrex leads the krogan, he will be waiting for you at Normandy Dock: Bay D24 with a recording of your conversation with Dalatrass Linron. Enraged at this betrayal, he tries to kill Shepard. He cannot be reasoned with regardless of your choice of words.

There are two Renegade interrupts that will allow you to shoot him, but in both cases Bailey and C-Sec will take him down if you decline.

Because the three singleplayer DLCs (Mass Effect 3: Leviathan, Mass Effect 3: Omega, Mass Effect 3: Citadel) added rapid transport terminals throughout the Citadel, it is now possible to sabotage the cure, obtain salarian support and keep Wrex alive until the end of the game. This was probably an unintended consequence of using them since story sequence breaks in at least one other scenario: choosing whether the Virmire survivor stays with you or goes with Hackett.

The drawback is that you'll never be able to return to the Citadel all the way to the point the Reapers commandeer the station after Priority: Cerberus Headquarters for fetch missions or whatever business you might have there but this can be mitigated by careful mission planning and execution.

Priority: Thessia becomes available. If the cure of the genophage is sabotaged and Wrex leads, you also lose the Clan Urdnot and krogan mercenaries War Assets. (If Urdnot Wreav leads, he remains oblivious through the end of the game.)

Additionally, the incident with Wrex appears to have been covered up as evidenced by an ANN mail you'll receive on the Normandy if you were forced to kill him.