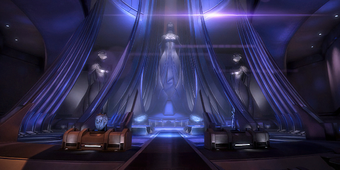 The asari, growing desperate as the Reapers attack their systems, have revealed an artifact that may hold the key to finding the Catalyst. Meet a scientific team at a temple on Thessia and investigate the artifact for clues.

This mission is acquired automatically after speaking to the asari Councilor in the late Donnel Udina's office. 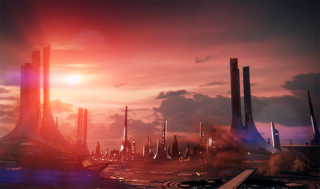 In this mission, the Reapers will be throwing their entire playbook at you. This means lots of armor, some shields, and barriers (including the use of barrier engines). With the large number of heavy hitters here, having people with the right abilities to pull off Fire Explosions is highly advised.

Liara is a mandatory squad member in this mission. She is useful for crowd control, against armor and barriers, and can both prime and detonate Biotic Explosions. However, she is ineffective against shields, so it's a good idea to have someone else (Shepard and/or the other squadmate) with anti-shield powers against Marauder shields as well as an upcoming boss fight. Some of these powers are also effective against barriers.

With Liara's abilities in mind, gearing a squad towards spamming Biotic Explosions can also be considered. Another way to go about this is to build the rest of your squad around raw damage, which Liara simply doesn't provide a whole lot of.

Note: Be sure to bring Javik on this mission at least once. Besides having a few scenes all to himself, he adds enlightening detail about the history of the asari, though Liara may find this very controversial.

Husks at the Barricade[edit | edit source]

In the first area, there's an Umbra Visor and supplies worth 4,500 credits towards the right, away from Lieutenant Kurin. Grab it before you do anything else, because speaking to Kurin will cut off access to the starting area. When the fighting begins, she directs you to use a turret gun to the right of the barrier. Multiple Brutes appear, as well as Husks that will run towards the asari soldier's biotic barrier in an attempt to damage it. A Barrier Engine is located where the Brutes are spawning, and it will essentially double the enemies' ability to take damage until it is destroyed (if you want to be super-tricksy you can climb up on the platform and destroy the Barrier Engine before starting the cut scene with Kurin). There will be three groups of Brutes spawning at a distance, intermixed with waves of Husks jumping over the wall nearer at hand.

Though deceptively similar to the earlier Husks-at-the-barricade incident on Menae, this encounter adds an urgency element in the form of the barricade's health bar. The simplest solution to this is to destroy the Barrier Engine first, then prioritize anything standing next to the barricade, and then if you have time to pound down spawning Brutes before they get across the bridge then that's great. But don't leave a group of husks pounding on the barricade to engage Brutes that aren't: though you'll intuitively fear the Brutes more, objectively the Husks will do more damage during the time you're hitting the Brutes than a Brute getting a couple of very-slowly-delivered hits in. Keeping your gun mostly pointed at the barricade will make the most efficient use of your limited time and firepower. Finally, remember that the turret will turn much more quickly if you refrain from using the zoom-in-aim function. 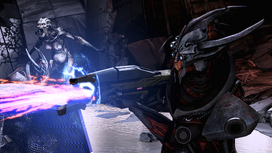 After a cutscene, proceed across the bridge. A group of Marauders and Cannibals flood towards you from the other side of the bridge. Take out the Marauders first. The far side of the area looks like a dead end, but the path is visually blocked by a wall. Continue forward to the end of the path and turn right. Proceed for more Marauders and Cannibals, as well as Spore Pods. Halfway across the room, you can access two med-kits, one on the right and one on the left. After clearing the Marauders, go to the far left to pick up a M-560 Hydra missile launcher. As you move a little further up, Liara informs you of a door just ahead, but you need to deal with the Marauders and a Banshee first. Fortunately, the Banshee appears at a distance, giving you more time to damage it. The Hydra will be very helpful against the Banshee especially; however, the Hydra only contains one missile, so careful aiming is recommended.

Walk along the path while salvaging the Terminal worth 7,500 credits, and subsequently bypass a door. A camera prompt will appear for a Reaper in the not-too-far distance. You'll also see three Cannibals crouching in the courtyard below; with the right abilities, you can kill them without firing a shot. Just to the right of the Cannibals is a broken shotgun that can be salvaged for 3,000 credits. Easy to Miss: Directly above the broken shotgun on a small ledge is a Med-kit and Shotgun High Caliber Barrel.

Make your way over to an asari sniper on the elevated area and snag the med-kit, Sniper Rifle Concentration Mod and M-98 Widow before talking to her. Now take out as many enemies as you possibly can, starting with the Barrier Engine on the wall opposite you. The asari sniper will provide a constant stream of commentary, e.g. "You hit one!", but not much in the way of useful fire support. Once the coast is clear, proceed down the ramp to your left and collect ammo if necessary; there should be plenty. Go through the hole in the wall and to your left.

After the cutscene, you gain 450 experience and morality points depending on your conversation with the only asari soldier left at the outpost. Be careful of the Banshee as it can get ridiculously close within just a few seconds. Also take note of a Ravager just up the stairs, and a Barrier Engine on the far left, hidden by a partition. There is a M-560 Hydra missile launcher at your feet; for optimum use against the Banshee, retreat back the way you came and even further if necessary. If you haven't destroyed the Barrier Engine first, you might want to lure the Banshee away from it before loosing your one missile. Thankfully, you'll have some assistance from a gunship.

After you get rid of all the enemies, continue straight forward up the rubble and then to the right. Near the Spore Pods is an Assault Rifle Extended Barrel pickup. Past them, Husks attack you; past them, you tangle with two Harvesters accompanied by Marauders, Ravagers, and a Barrier Engine (on Insanity level a third Harvester shows up during the battle). Stick to cover, take shots at them whenever you can and watch out for any Swarmers. Tip: After dealing with the Husks, don't rush forward: scope and shoot the Barrier Engine from a distance before the next group of enemies appears. If you're still lugging a Hydra Missile Launcher, note that it won't reach the Harvesters but can be used to clear out the ground forces.

Consider falling back, which makes it easy to take out the Harvesters first, then get rid of the Marauders since they'll keep throwing up barriers and then get rid of the remaining enemies. Also be aware that you don't actually have to kill the Harvesters: once Talon Five is shot down, they will flee the battle. Continue forward and around to the left to find an SMG Heat Sink and a barrier for Liara to bypass, on the right of the temple entrance. 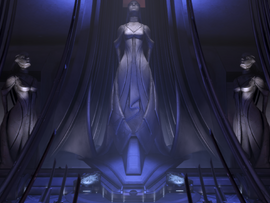 Make your way into the temple and pick up a med-kit close to the entrance. The scientists' bodies are lying on the ground near a large statue, which is the artifact you're looking for. However, before investigating the statue, search the temple for other artifacts to learn about the asari's history. If Javik is with you, he elaborates upon their history, in more detail than Liara.

When you investigate the statue, Shepard realizes that there is a Prothean Beacon in the temple. This helps explain how the asari are so advanced since they had the chance to study the temple for thousands of years and kept it a secret from the other species. You have to examine other artifacts to activate the beacon, which reveals a Prothean VI, Vendetta. When you're done conversing with it, it detects someone who is indoctrinated. Kai Leng delivers a hologram of the Illusive Man, who explains more about his goal to control the Reapers instead of destroying them. Regardless of what you say to him, you'll have to fight Leng.

Stay behind cover as Kai Leng sends shockwaves that disable your shields. Although Leng's health bar shows shields and armor, for this battle you're only concerned with depleting his shields. Once you take out about half of his shields a gunship will cover him while he recharges them, during which process you'll need to stay in cover lest you be machine-gunned down. This will repeat a couple times. When you finally get Leng's shields all the way down, a cutscene will resolve the rest of the battle.

Combat Notes: You'll want to avoid letting him get close to you, moving if necessary, but if you hit him with everything your squad has got immediately, especially anti-shield abilities, this won't become an issue. If your squad can create a Tech Burst, it will finish most of his shields off right away, even on Insanity. Likewise, Lash with the shield-piercing evolution will allow you to throw Kai Leng around like a toy. Just keep as much distance as possible and make sure to stay behind cover when the gunship starts shooting.

By the end of this mission, you will gain 15 Reputation, 15,000 credits and morality points depending on your conversation options.

Retrieved from "https://masseffect.fandom.com/wiki/Priority:_Thessia?oldid=526769"
Community content is available under CC-BY-SA unless otherwise noted.