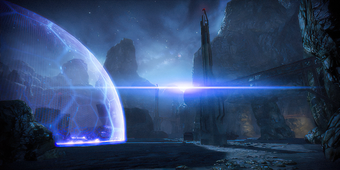 This assignment is acquired after the one on Karumto. To start the assignment, head to the location indicated in the journal entry. On the galaxy map this assignment is labeled as Firewalker: Prothean Ruin. Scanning Kopis reveals an anomaly, returning no signal.

These notes are displayed after:

The title of the journal entry changes to "Project Firewalker: Prothean Ruins" upon landing on Kopis.

Bring Down the Barrier Edit 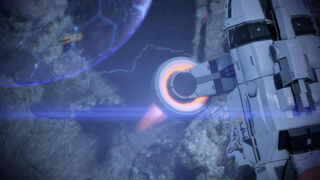 The mission begins with the squad in the Hammerhead. The Hammerhead's onboard VI explains that the kinetic barrier protecting the dig site is too powerful for conventional weapons to penetrate. The barrier must be brought down by destroying the generators that power it. Just follow the power lines to find them. Watch out because Rocket Drones will pop up all over the place in this mission. Just avoid damage and if need be then retreat and recover before charging back in. Also don’t run into the barrier or a Rocket Drone, it causes damage.

Note: You don't actually have to destroy (or even shoot at) any of the Rocket Drones. Just staying on the move and shooting the generators is pretty simple to accomplish.

There are 4 eezo deposits to find outside the base for a total of 1020 eezo. A single deposit may be found at ground floor. Opposite the ground floor generator, across the map is a deposit, on a cliff. If you then follow this path round, through the tunnel containing a generator, a third deposit may be found by jumping across a gap to a cliff at the same height. The final node may be found near the highest generator just next to it behind a protective rock formation. 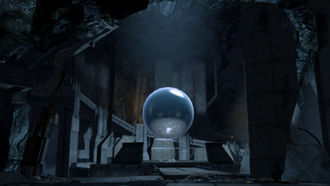 Once the last generator is destroyed, the barrier falls, the enemies stop coming, and it allows the squad to leave the Hammerhead and move inside the ruins on foot.

Once inside the first room you see the bodies of a number of Blue Suns mercs, a box containing 225 eezo and a datapad on a bloody table, see below. Continuing deeper into the site you will reach a journal, see below. A dead merc nearby is willing to part with 3750 credits and another eezo container, 255. Continue until you reach a terminal for a biotic damage upgrade, and another journal, see below. Hack the computer console to get access to the relic. It is similar to the one encountered on Eletania. Near the entrance is a dead body with the last datapad, see below. Examine the relic and it will glow green then shrink to a more manageable size.

The relic can be found on the coffee table in Shepard’s cabin aboard the Normandy SR-2.

A recording from Dr. Cayce next to a few Blue Suns corpses:

“Dr. O'Loy must have been indoctrinated by the Reapers. I found him sending our data to a geth ship. I won't be responsible for another geth attack, another Eden Prime. I've silenced O'Loy... forever.”

Another datapad with a recording from Dr. Cayce:

“It's too late for me. They're still in my head, stealing my thoughts. I can't keep them out. I've got no choice but to destroy this relic... and myself.”

Retrieved from "https://masseffect.fandom.com/wiki/Project_Firewalker:_Prothean_Site?oldid=482381"
Community content is available under CC-BY-SA unless otherwise noted.