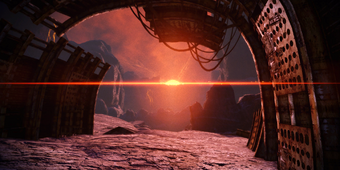 Cerberus' Project Firewalker has reported that a survey ship has gone missing near the planet Zeona. The ship was carrying researchers and a prototype planetside exploration vehicle when it went missing. Cerberus has asked that the vehicle be recovered and that any signs as to whereabouts of the researchers be reported.

A message is sent to Shepard's private terminal from Project Firewalker:

Head to Zeona in the Elysta system of the Ismar Frontier to start the mission. Scanning the planet yields the following:

“Scans have located the Hammerhead exploration vehicle and also show active data storage sites that may contain information as to the whereabouts of Drs. Cayce and O'Loy.” 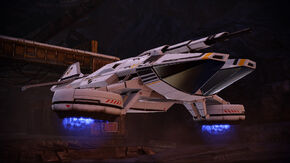 Zeona is a volcanic world. When the shuttle lands, it drops Shepard and the squad off. Shepard looks down at some wreckage, near the lava. The shuttle takes off and flies away. At the start, a recording from wreckage starts to play saying that they have run into the geth far too often. The person in the recording says he is moving to another site to stay with Dr. O’Loy as he felt it's safer there. Nearby is a cargo container computer which you can bypass. After bypassing it, the container opens and reveals the M-44 Hammerhead. Shepard and the squad climb inside and the vehicle activates.

The next part of the mission requires you to collect research data from yellow circles on the ground. Take a few seconds to familiarize with the controls of the vehicle. Then gently hop down and grab the first research packets, all of which gives you credits. Pick it up using the scanner, though you have to keep the vehicle in place as it will move about while collecting the research data. Once you are done, use the jets to jump up to the next research packet. Use the Hammerhead’s main gun to blast through a hull wreckage. Use the jets to avoid the fire and enter the next area. 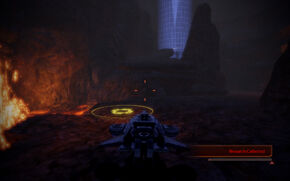 The next area is very linear. Go to the left and grab the next packet. Then continue on to the left and up a rock ramp on the left side of the canyon. Use the jets to get up, then grab the packet. Then turn around and use the ramp you jumped over to get you up to the plateau. Scan the packet inside the ruined ship hull, then again turn around and head for the next blue cylinder-shaped light. Turn 90 degrees to the right from the direction you came from and head over the gaps, following the path and eventually the final light will come into view around a corner while you are hovering in the air. Grab the last packet then end the mission.

You are then treated to a cutscene where the Normandy SR-2 flies over and the Hammerhead jets into the cargo hold.

Note: The mission report incorrectly states that Cerberus provides 7,500 credits of funding for a total of 15,000. In fact, only the credits found for recovering the six research data are awarded, a total of exactly 7,500 as it is impossible to complete the mission without collecting all six.

Retrieved from "https://masseffect.fandom.com/wiki/Project_Firewalker:_Rosalie_Lost?oldid=453657"
Community content is available under CC-BY-SA unless otherwise noted.