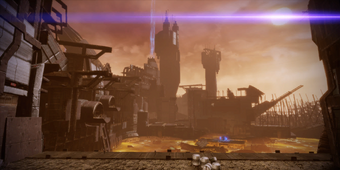 Data shows that Dr. Cayce had stopped on planet Corang to run tests on artifacts found on the planet's surface. Recovering the data he collected could lead Cerberus to discover Dr. Cayce's last known location.

This assignment is acquired after retrieving the Hammerhead from Zeona. A new entry in the journal indicates Shepard should head to Corang (Verr system, Hawking Eta cluster) to start the assignment. On the galaxy map, this is called Project Firewalker: Artifact Collection. Scanning the planet reveals an anomaly, returning no signal.

Shepard will be given the opportunity to choose squadmates, however, this decision has no impact on the mission. 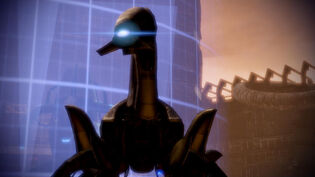 When the Normandy drops the Hammerhead, a Geth Colossus is shown activating and standing up. There are five sites on this planet you must scan to acquire the information you need.

Immediately after you land, there is a squad of Geth Troopers up ahead. Use the Hammerhead’s main gun to eliminate them. If you hear a warning siren, then the Hammerhead’s shields are down and eventually the vehicle will catch on fire just like the Mako when it takes heavy hull damage. Just move out of the firing area, just like when you are on foot, and wait until the siren stops. Then head back in.

When you finally eliminate the troopers, move up to where the first location is. Guarding this site is a Colossus along with three Geth Troopers. However, a Geth Dropship drops them off as you approach. The Colossus here is without health, so batter down its shields, then destroy its armor to eliminate the unit. Because this site is raised up from the ground, use the jets and keep moving to eliminate all the geth in the area. Remember to retreat if your shields fail. Once they are down, scan the site and move on. 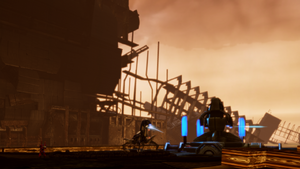 Head around the corner, and eventually, you will see two Geth Troopers in the distance; shorten their life expectancies and move up. Be careful as you approach the cliff, because that isn’t funny-colored water... it's acid that will destroy the Hammerhead instantly on higher levels. Get onto one of the rock islands and prepare for another gun duel. On one of the left islands is a site that holds 1,250 platinum, you may as well grab it now, because you are still out of range of the geth.

If you stay near the site, you may accept the challenge of picking off the defenders without ever being shot at effectively. A Colossus, a Geth Destroyer, and two Geth Troopers defend this site, so the difficulty is about the same as the last one. Use any tactics, preferably stay at range to eliminate the geth. Once they are down, grab the research. By the way, it is not recommended you try to ram the geth, as the Hammerhead is more damage-prone than the Mako. If you go to the island to the right of the one with the ramp, the Colossus will not shoot at you and you can use the main gun to take it down. 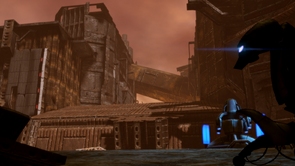 Once you have the research from the second site, use the jets to get over to the island and then up to the metal ship hulk. From here, you have two options to get to site three: left up the ramps and through the tunnels, or right using the jets to get up to the platform. Either way, you wind up at the same site.

As you approach the site, another dropship flies overhead, dropping a Colossus, two Destroyers, and two Troopers. A good tactic here is to use the ship hulk on the right path as a ramp to cross over the battlefield. Once on the other side, you can shoot with ease because nothing will challenge you, because they can’t shoot at you. Once the geth are down, using any tactics you wish, head to the artifact, and collect it. 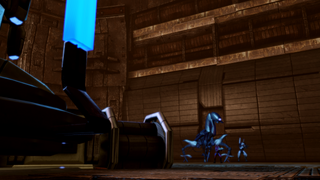 To get to the next site, you can either use the ramp as described above, or you can use some debris in the middle of the battlefield you just cleared. Either way, you have to go up to continue.

Once you are up, there is more acid and another ramp; guess what you have to avoid and how to do it. Once you make it across the acid pool, using the platforms as cover, the first platform on the left has a scan site for another 1,250 platinum.

When you get to the second platform, you come across two paths, one left and one right. This will determine where you start for the coming fight. If you like range, then go left; if you like to get up close and personal (not recommended in this vehicle), then go right.

Either way, once you get close, another dropship (curse them) drops another Colossus, a Destroyer, and a Geth Prime. Take them out any way you wish, then collect the fourth artifact. 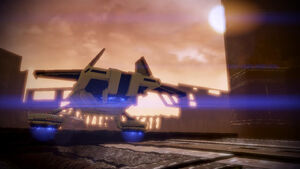 Once you collect the artifact, your best option is to go up the ship hulk that divided the previous battlefield. When you are about halfway up, some friends fly up to meet you, three Rocket Drones. They aren’t accurate at range, but then neither is the Hammerhead. Stay back to avoid the rockets, and once they fall, use the jets and boost to get to the elevated platform. When you get up there, there is a scan site to the right that gives 1,250 platinum, so grab it.

From here, you should see the fifth site, and a dropship should be coming any moment now. Use the jets to get to the first platform, get close enough to the ledge sticking out to trigger the geth drops, then use the gun to take out the Colossus, two Primes, and two Destroyers from a distance. The Hammerhead is more accurate with large targets. You don’t have to move to take out the Primes and Colossus, though you may have to get up close and personal with the Destroyers. Once they are down, before grabbing the artifact, there is a path to the right behind the site that leads to another site of platinum. Then head back and end the mission.

Geth presence on the planet eradicated.