Project Overlord was a Cerberus research project based on Aite intended to devise a way to control the geth. 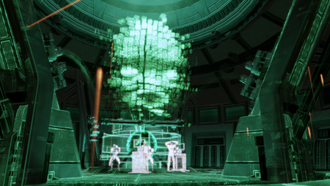 The project was only partially successful. David Archer, chief scientist Dr. Gavin Archer's brother, volunteered for the experiment to meld his mind to a VI. The VI overwhelmed David and the resulting hybrid essentially became a virus, which proceeded to take over the facility and used the live geth that had been acquired for the project to kill off the Cerberus staff in Hermes, Vulcan, Prometheus, and Atlas Stations.

The VI attempted to leave Aite through the facility's communication dish, but the dish was destroyed by Commander Shepard. If it had escaped, potentially every electronic device in the galaxy accessible by the extranet could be subsumed and used by the VI against an unsuspecting populace.

The VI itself was designed by Cerberus to exploit the religious tendencies of the geth. This was inspired by Cerberus' observations of Saren Arterius as a leader of the geth in the events leading up to the Battle of the Citadel. The researchers hoped that the hybrid VI, essentially a "computer program with a face", could become a similar kind of figurehead and thus give Cerberus complete control over all geth.

It is later revealed that David Archer, the human component of the hybrid VI, was autistic and a mathematical savant. David's unparalleled understanding of mathematics allowed him to communicate with the geth on a fundamental level; communication had previously been a significant hurdle for the project, and without any results the Illusive Man threatened to shut the project down. Dr. Archer realized the potential of this breakthrough, and forcibly incorporated David into the VI. At this point, the hybrid VI went berserk and began its rampage and escape attempt.

After deactivating the rogue VI, Shepard's decision about who should handle the care of David Archer determines if Project Overlord will continue or be decommissioned.

In 2186, Gavin Archer can be met again by Shepard in Gellix where he took up refuge with other ex-Cerberus scientists. If asked, he shares his knowledge of what happened to the project.

If Shepard freed David, Gavin began feeling regret over being involved in Project Overlord. Thus, he chose to erase all information on the project and left Cerberus. David was left in the care of Jon Grissom Academy and is one of the students trapped there when Cerberus invades the station in 2186.

If Shepard chose to let Overlord continue, Gavin reveals that, as the test continued, David began communicating better and better before suddenly becoming catatonic. Out of regret and feeling it was the only way, he euthanized his brother to end his suffering and fled Cerberus. He gives Shepard the Overlord results.

If Shepard never investigated Project Overlord, Gavin states that the situation in the research facilities eventually grew out of control and he was forced to detonate its nuclear failsafe device, which destroyed the whole base.

It is also revealed that the geth had been eavesdropping on Cerberus regarding Project Overlord. The synthetics have refined the human/VI interface into a much safer construct. Instead of intrusive body probes as was done with David Archer, the geth version of the interface takes the form of an easily-deployable man-sized pod that scans its occupant, requiring only a minimum of movement during the initial mind upload. Legion (or the Geth VI) constructs such a device incorporating Normandy equipment on Rannoch if Shepard embarks on a mission that requires entering the geth consensus.

Katherine Nigh (aka the hacker Knight) and her son Alain were part of Project Overlord in its early stages. Katherine's son Alain had a degenerative disease that required implants for him to walk. His implants would be hacked in preparation for plugging into the machines that would later be used for David; Katherine interceded creating a malicious code to halt the project. After retrieving her son, they fled and eventually left the galaxy as part of the Andromeda Initiative. There, Katherine founded a group of like minded individuals who had been affected by AI and engaged in anti-synthetic terrorism. Ryder can talk her down from destroying the quantum computers on the Nexus by proving that SAM fixed Alain's damaged implants or have a sniper team kill her.