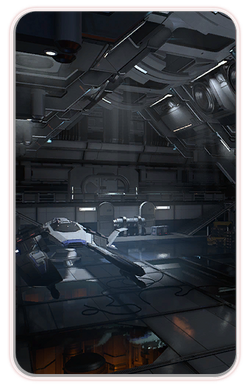 Meet your father, the Pathfinder, on the Hyperion's bridge.

Since this is the very first mission, you obtain this one immediately after generating a new character or importing an existing character.

This prologue mission is mainly intended to present the events that lead to Pathfinder Ryder assuming the protagonist role. Taking place six hundred years after the events of Mass Effect 3, in an entirely different galaxy, this is a fresh start.

Upon waking up from cryostasis, Ryder will be taken to the Cryo Bay to be checked out by Dr. Lexi T'Perro. Lexi checks your SAM implant and makes sure you're ready for action. If you're playing on a fresh game, Ryder starts on the default short-sleeved casual outfit. If you're playing on a New Game Plus, Ryder starts this game wearing their last outfit, but using the default white and blue color scheme.

As Ryder begins to regain bearings with some warm coffee, a cutscene starts and something goes wrong where the ark encounters a strange celestial energy cloud. The cloud managed to damage one of the relays on the ship near the Cryo Bay causing a temporary loss of gravity and erupting chaos throughout the ark. Cora Harper then enters and fixes the gravity issue.

After the cutscene, you're given the first primary objective of the game and an optional objective to check on Ryder's twin sibling who is currently in a damaged cryopod nearby.

Report to the Hyperion bridge Edit

Simply follow the navigational marker to the bridge. You can consult the map for directions. Since you'll arrive there eventually to progress the game, you can spend some time exploring the immediate surroundings.

If you get lost, you can always consult the navpoints on your HUD and map (

for main objectives and

for optionals) that also mark how far you are from them.

Optional: Check on your brother/sister Edit 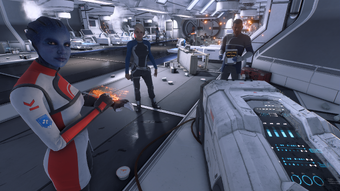 To accomplish the optional objective, you need to talk to Dr. T'Perro (marked with

). It appears that your sibling, although in stable condition, will have to remain in a low-level coma temporarily. Cora loiters here first, then walks toward the door afterwards.

After completing the objective, feel free to investigate the nearby area for datapads, interesting conversations, or learn more about the mission from the information wall located on the eastern wall of the Cryo Bay.

Hayes has a couple of opinions by the information wall. Dr. Harry Carlyle assesses Liam Kosta's health by the beds. Dusty Kirkland and David Fisher engage in idle talk near the exit. Greer by the cryo pods is recently defrosted and being coaxed into lucidity. They (and Lexi) have some dialogue snippets in and outside their conversation triggers, so if you want to hear them all simply walk a considerable distance from them then return to load their next batch of lines. Be wary of potential audio overlap though, if done incorrectly.

If you consult the game menu, one of the things you can access right after assuming control of your Ryder character is the Codex. This is a database of background information about the setting, and throughout the rest of the game it will be updated with new, rewritten, or appended entries as a result of plot progression. At the very beginning you get several bootstrap entries that can be read at your convenience. After checking on your sibling, the codex updates with an entry for either Scott or Sara Ryder.

Once you're ready, head to the

marker (known as a navpoint) to use the door to exit the Cryo Bay. 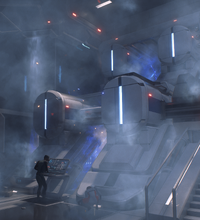 Upon exiting the Cryo Bay, Ryder witnesses an explosion from a damaged power relay. As the crew attempts to fix the problem, they call on you to use the new scanner function to locate and repair the damaged power conduit.

Note: If you didn't check up on your twin earlier, the optional mission is marked as failed at this point since the door closes behind you during the explosion.

Scan the power conduit to locate the fault Edit

Push the button that brings up the scanner, aim it at the damaged area, and you will find three items that glow dark orange until successfully scanned. Target the three items (Compensator Relay, Axial Coupling, and the Phase Coil) and push the appropriate button so the items change to a light yellow color and a description box of each item appears. Only the Compensator Relay is required to be scanned before the next objective appears.

Note: This minor objective introduces the scanner function of Ryder's omni-tool. This mechanic will be important throughout the game.

After scanning the correct component, a new objective and a new navpoint becomes active. Approach and interact with the Power Terminal up the stairs to avert another disaster in the Cryo Bay.

The codex entry for the scanner becomes available upon completion.

Head to the tram Edit

If, for some reason, you didn't check up on your sibling earlier, Cora runs toward the tram updating you of Lexi's findings regarding your twin.

Head towards the navpoint on the tram and there is a datapad on the floor in the hallway.

Open the door to enter the tram.

Cora will come running up the hallway and into the tram. Note: This only appears if you got to the tram earlier than her.

Interact with the Tram Console to take the tram to the bridge.

Once you and Cora arrive, a brief cutscene ensues where Captain Nozomi Dunn and Alec Ryder argue over the next move to make: assess and repair Hyperion, or find some solid ground to land on first. Shortly after, Captain Dunn notes Ryder Sr.'s intractability and allows you to give an opinion on that. It doesn't matter which dialogue choices you select, soon you'll be preparing for the first mission to Habitat 7, New Earth. 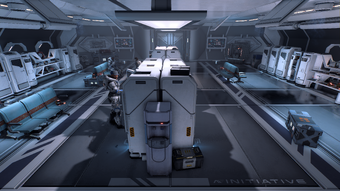 After the cutscene, you and Cora next appear in a staging room in the hangar bay. Several new codex entries are added at the end of your talk with Cora, namely about your mom and dad (and twin, if you failed the optional objective), Cora herself, golden worlds, and the yet-unnamed phenomenon plaguing Hyperion.

Note: On fresh games, you start with a basic white/blue Initiative Armor I set. On New Game +, your first combat suit is a black/red Initiative Armor X set regardless of prior level. These can be verified upon gaining access to the inventory in the next mission. Both sets require a helmet, leading to the next objective.

Get your helmet Edit

Pick up your helmet on the armor rack behind Dusty Kirkland and Lucas Greer. This is an Initiative Helmet I.

Alec now authorizes the use of firearms and SAM unlocks the weapons locker on the other side of the room. Pick up the firearm. This is an M-3 Predator. Unlike the helmet, the Predator is level I if on a fresh game or level X if imported from New Game Plus.

Should you draw out the gun, the game will tell you how to holster it. Should you try to fire it for whatever reason nothing happens; Cora admonishes a warning and considers it fortunate the safeties are on.

In the room are two additional datapads. 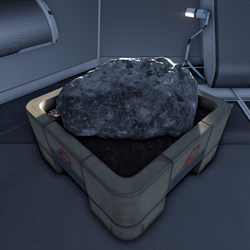 You can interact with several items and characters in the room. Alec's "good luck rock" is on one corner. Between that and Cora's location is a water cooler (that can't be drunk from; no bathroom breaks planetside apparently). You can also inspect your dad's and your sibling's lockers for some mood setting.

Kirkland and Greer can be talked to and the latter inquires what's going on, where you can answer in any manner. The ambient music terminal near them can be deactivated, to Kirkland's consternation, but it can be reactivated once. Pathfinder team member David Fisher will comment on your decision to side with either Captain Dunn or Alec Ryder in the previous cutscene, and after talking to him the codex entry for N7 will be unlocked.

Scanning the aforementioned items and characters yields some basic information and not much else.

Report to the hangar bay Edit

Once you're ready, head out beyond the door.

On the shuttle bay Dr. Carlyle prepares some crates in anticipation of tagging along with the mission to the planet, prompting a response from you. Afterward, Alec talks about your sibling and requires another response from you. In both dialogue cases, choose whichever you feel is appropriate.

Following these, Alec assembles the team and gives a brief rousing speech. Now it's time to board the shuttle and begin exploration. The mission then completes, but not shown on screen.

The Pathfinder team is assembled and ready to explore Habitat 7, hoping to find the world suitable for an outpost before the damaged Hyperion ship loses all power and jeopardizes the lives of all 20,000 people aboard. 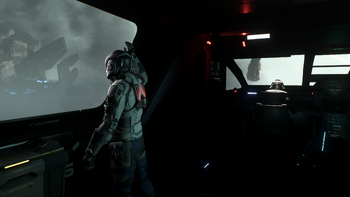 The shuttle ride down to the planet is essentially a long cutscene with limited means to move or interact. You can look around, but not move. A relatively uneventful but choppy ride comes alive when you begin to see signs of alien civilization, floating rocks, and a foreboding landscape. The golden world apparently turns out bunk, to the consternation evident in radio chatter.

Liam formally introduces himself to you here. Shortly afterward a lightning bolt strikes the shuttle you're both in. Liam gets sucked out and you try to pull him back, but an explosion sends you both plummeting to the ground.

Retrieved from "https://masseffect.fandom.com/wiki/Prologue:_Hyperion?oldid=520071"
Community content is available under CC-BY-SA unless otherwise noted.