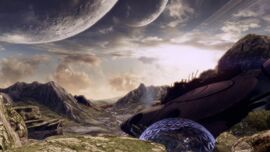 Prometheus Station is part of a series of Cerberus research facilities on the planet Aite devoted to Project Overlord.

The station is actually a crashed geth ship full of dormant geth units, which are used by the Project Overlord research team in their experiments.

During the mission to breach Atlas Station, Commander Shepard is told by Dr. Gavin Archer that the overrides at Prometheus Station and Vulcan Station need to be overridden before Shepard can access Atlas Station.

Retrieved from "https://masseffect.fandom.com/wiki/Prometheus_Station?oldid=442557"
Community content is available under CC-BY-SA unless otherwise noted.