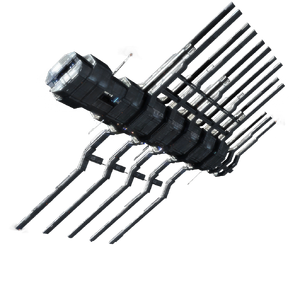 Purgatory is a maximum security prison starship owned and run by the Blue Suns. There are about 30 blocks on Purgatory. In each block, there are many cells that are self-contained for their occupants and can be moved through use of mechanized claws. Purgatory is where Commander Shepard can recruit Jack, a dangerous and highly unstable biotic.

Owned by the notorious Blue Suns mercenary company, the Purgatory was once an "ark ship" used to hold agricultural animals. Now it is used to hold prisoners, whether taken in battle or sold by unscrupulous politicians under the name of subcontracting and outsourcing. Rumors abound that the Blue Suns turn skilled or fit prisoners over to batarian slavers, but few have ever seen the transaction and lived to tell about it. Its population is listed at 4,350, but independent journalists estimate it is nearly three times that in periods of overcrowding.

Originally an "ark ship" designed to carry agricultural animals, the Purgatory was taken by the Blue Suns mercenary company during a large-scale battle in the Skyllian Verge. In a years-long reconstruction of its interior, the Blue Suns repurposed it to hold sapient prisoners, supposedly because they captured so many in their conflicts throughout the galaxy. When media outlets started investigating claims that the ship was used for slaving operations, the Blue Suns turned a public relations nightmare into a regular income source.

Claiming to be in full accordance with Citadel law, the crew of Purgatory now regularly lands on planets or space stations claiming that they can no longer hold their prisoners because of cost overruns. To avoid keeping prisoners under inhumane conditions, they will have to release them at the nearest port, dumping the scum of the galaxy directly into the local population. Faced with such a scenario, the government usually grants Purgatory's crew massive discounts in fuel, food, and repairs as long as they go away. Some even offload their own prisoners to Purgatory for a fee, grateful to have a problem relocated somewhere other than their backyard. Such unfortunates go in the dark depths of the ship, never to be seen again by their families or contacts.

Purgatory is minimally armed with GARDIAN defenses. Though a cruiser-weight ship, it relies on the Blue Suns' fighters to prevent any attacks bent on a jailbreak or similar events. 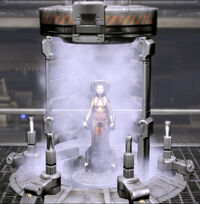 Upon arrival to the Purgatory, Shepard is informed that the "package" is being prepared. Warden Kuril indicates that Cerberus paid for Jack's release. Shepard is directed to the Outprocessing area of the ship. On the way to outprocessing, Shepard has the opportunity to stop the brutal interrogation of a prisoner called Bimmy before moving on. At that point, Warden Kuril betrays Shepard, explaining over the intercom that the Commander is "worth more as a prisoner than a customer" and sics the Blue Sun guards on Shepard's squad.

Shepard and the team manage to fight them off and then release Jack, who goes on a brutal rampage throughout the prison causing catastrophic damage. By the time Shepard faces and kills Kuril, the prison has endured significant structural damage, and is falling apart. In the aftermath, the Council sends rescue ships to save any guards or prisoners that survive in escape pods.

After having to release all prisoners in order to rescue Jack, Shepard receives a message by someone called Billy, who promises to carve Shepard's name instead of his own into his next victim. He promises to find and kill Shepard because he got shot on his way out. This is the e-mail sent to Shepard, with no header.