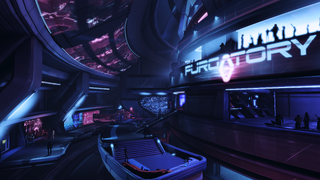 The Purgatory Bar is a popular dance club and bar on the Citadel, though it is not known by Avina to be a registered nightclub. Various citizens from all races often visit the bar to drink and dance in order to detach themselves from the issues of the war with the Reapers.

Should Shepard get drunk in Purgatory, the Commander wakes up after sleeping off the alcohol next to Aria in the VIP Lounge. If Shepard gets drunk again, the Commander will end up on the elevator outside of Purgatory. At this point, Shepard will be unable to use the bar until the Commander leaves the area and returns.

Aria uses Purgatory as her base of operations after Omega was taken by Cerberus. She loathes the club, ironically calling it hell, and comments about its inferiority in comparision to Omega's Afterlife Club. However, she can still be found here after retaking Omega. 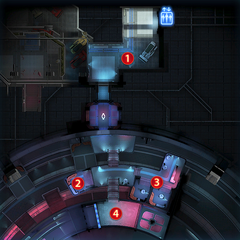 Retrieved from "https://masseffect.fandom.com/wiki/Purgatory_Bar?oldid=417692"
Community content is available under CC-BY-SA unless otherwise noted.