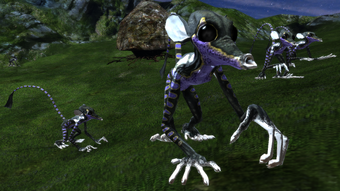 Pyjaks, sometimes referred to as "space monkeys", are a primitive species found on several planets including Eletania, Tuchanka, and Zorya.

The fact that they are able to thrive in such varied ecosystems suggests a very high ability to adapt. They live in small colonies of rough shelters, and appear to do little more than wander around in groups. They are apparently a somewhat curious species, and have been known to scavenge pieces of technology.

The krogan of Tuchanka view space monkeys as an invasive nuisance, so much so that they may insult other beings by calling them pyjaks. The creatures have been spotted clinging to tree branches, sticking out their finely-pointed tongues, suggesting that they eat small insects and grubs from the crevices in tree bark.[1]

Commander Shepard may travel to Eletania after being tasked with finding the data module of a crashed probe that was monitoring geth movements. Upon investigating the crash site, Shepard learns that the module has been stolen by indigenous creatures, the pyjaks, and is forced to track down and search several pyjak colonies for it. The culprit pyjak is found inside an abandoned mine.

There are a dozen pyjaks in the jungle on Zorya, the planet Shepard may visit to gain the loyalty of Zaeed Massani. They can also be found in a storage hold on the krogan planet Tuchanka.

At the Urdnot Camp on Tuchanka, they steal food from the merchant Ratch, who invites Commander Shepard to use a rocket turret to kill them before they can raid the camp's supply cache. If successful, Ratch gives Shepard a discount on items and allows the Commander to purchase pyjak meat, which can be fed to the varren Urz. The hospital area of the camp also has a pyjak sitting on top of the crates in the corner; Shepard has the option of punching it.

According to Ratch, pyjaks were brought to Tuchanka by a trader who had visited Eletania. Several pyjaks stowed board the trader's ship and then swarmed out when the trader landed on Tuchanka, stealing things and defecating everywhere. When the leader of Clan Forsan was hit with pyjak dung, the trader responsible for their presence was executed.

Pathfinder Ryder can obtain a pyjak once the Nexus is reached and access to the Tempest is granted, the reason being is that one of Professor Herik's experiments require insight on various species' adaptations to shipboard life.

The pyjak's cage can be found on the Common Area, and once it's brought to the Tempest it breaks out of containment. The space monkey serves no purpose (and isn't even assigned a name) other than providing comic relief as Ryder's crewmates comment about its presence.