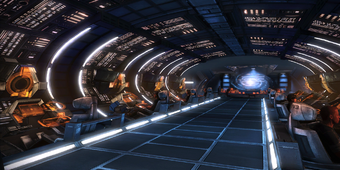 Saren is searching for the Conduit, an ancient relic dating back to the Prothean extinction. Through the visions burned into your mind by the beacon on Eden Prime, you believe that the Conduit is a weapon capable of wiping out all life in the galaxy. Saren must be stopped!

This mission is acquired in the Journal at the completion of two of the three plot missions on Noveria, Feros, or Therum. On accessing the Normandy's galaxy map in the aftermath of the second mission, the Citadel Council will request a priority holo-meeting in the ship's comm room to reveal the latest information on Saren's activities.

This is the overarching mission of Mass Effect and will update over the course of the game with the completion of additional plot worlds.

Race Against Time is a mission that doesn't relate to any specific point in the game. Rather, it is your ongoing mission to stop Saren Arterius' plans, and is completed by finishing the game.

The mission name is updated several times throughout Mass Effect, and these changes correspond to specific points in the game. They are explained below.

Note: In order to have the location of Ilos revealed, you are required to complete the missions on Therum, Feros, Noveria, and Virmire in their entirety.

This is the name given to the mission when it is first acquired.

The mission acquires this name after you have met with Sovereign on Virmire.

The mission acquires this name after you speak to Vigil on Ilos.

The mission acquires this name after you have passed through the Conduit and re-enter the Citadel.