Mass Effect
Mass Effect 3
Rachni Queens are the matriarchs of the hive-minded, insectoid rachni species. The largest of their species at about fifty feet long, queens are powerful and intelligent creatures who guide the soldiers and workers of their broods with a form of telepathic song, which also allows them to speak through "receptive" beings of other species. Queens also carry the genetic memory of their mothers, causing them to effectively be born with the collective knowledge of the previous hive.

Queens resemble brood warriors but are much larger, with darker skin and glowing eyes. Though queens are usually mated to brood warriors, the reproductive processes of the rachni do not necessarily require a male counterpart. Queens carry the genetic information of their fathers inside them, allowing them to lay eggs even if no brood warriors are present. They are said to be able to lay a massive amount of eggs every few hours, resulting in an entire rachni colony within days.

Rachni queens live in nests deep underground, often on planets with harsh environments. This presented a problem for the Citadel Council during the Rachni Wars, as it was impossible for Council representatives to contact the queens in their nests in order to negotiate peace. After attempts to halt the rachni advance failed, the krogan entered the fray, infiltrated the rachni nests, killed the queens on every world, and hunted the rachni to total extinction. 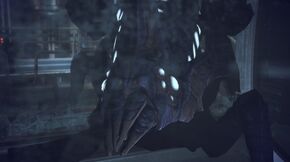 A rachni vessel escaped the conflict and was left adrift with many eggs in cryogenic suspension. A corporation called Binary Helix finds the vessel and brings an egg to the icy planet Noveria to hatch it, planning to clone the rachni inside to mass-produce an army, but instead they find a surviving rachni queen. She begins to lay eggs, which Binary Helix removes from her presence to train the brood as obedient soldiers, only to discover that rachni must develop close to a queen to allow her mind to shape theirs and soothe them. Without the queen, the rachni go rogue and escape, infiltrating and heavily damaging the facilities at Peak 15.

Matriarch Benezia, acting on orders of Saren Arterius, plans to use the rachni to destroy Saren's enemies, but Benezia needs more from this queen than her eggs. Using her biotics, Benezia takes the coordinates for the Mu Relay from the rachni queen's mind, drawing on the rachni's genetic memory.

When Commander Shepard arrives and defeats Benezia, the queen sees the opportunity to appeal to Shepard for forgiveness, using the body of one of Benezia's commandos to translate. The conversation gives the implication that the rachni queens are influenced by a 'sour yellow note', "a tone from space [that] hushed one voice after another", implying they were not fully responsible for the Rachni Wars. Wanting only to rebuild her species peacefully, the queen humbly asks what Shepard would do - kill her with the lab's acid tanks, consigning her to the "great silence", or free her instead.

If the Rachni Queen is freed, she escapes into the wilds of Noveria, remembering the kindness Shepard showed and intending to pass those lessons on to her new offspring. The turian Council representative is concerned that the rachni could challenge the Citadel again in a few generations, but Shepard can argue that this queen is not like her ancestors.

If Shepard chooses to kill the queen, she tries once more to appeal by asking if fear of the rachni's threat factored in the decision. If Shepard ignores the appeal, the queen decides to live and attempts to have her thrall manipulate the controls. Shepard pushes the dying commando away and personally activates the acid bath. Later, the Council scolds Shepard for making the rachni extinct once more, with the turian representative asking whether humans take pleasure in the genocide of other races.

If the Rachni Queen is killed, it is revealed in a news report that data recovered from the Peak 15 facility on Noveria points to the cloning of rachni in the facility but none being found.

If the Rachni Queen is set free, a newscast reports sightings of elusive scout ships consistent with rachni design. She also sends a message to Shepard through an asari, on the planet Illium, who relays the Queen's gratitude for being freed, and that she promises her aid to Shepard "against the coming darkness." 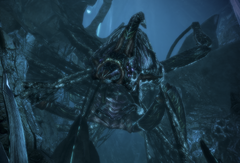 If the Rachni Queen survived on Noveria, she is captured by the Reapers in 2186. She proves to be immune (or at least highly resistant) to indoctrination, and as a result the Reapers are forced to use physical restraints to hold her captive. She is located on Utukku, deep within a perversion of a rachni hive filled with Reaper technology. Her young are indoctrinated and converted into Ravagers for the Reapers' forces. Shepard can choose to free her in exchange for her support against the Reapers, albeit sacrificing Aralakh Company. If Grunt survived the Suicide Mission and was loyal to the mission, he manages to survive, albeit with several injuries.

If Shepard chooses to leave the queen, she will accept her fate calmly, stating that she will "embrace the silence." She then presumably dies either from her injuries or at the hands of her Reaper-mutated children.

If the Rachni Queen died in 2183, then the Reapers will construct an artificial queen so they can have a rachni army to turn into Ravagers. If Shepard chooses to free this queen, then unlike the queen from Noveria, this artificial queen eventually proves untrustworthy after a few missions, taking away the rachni workers she gave at first and doing damage to the Alliance Engineering Corps on her way out. If Shepard chooses to leave the artificial queen, she will become enraged, screaming at Shepard through the krogan corpses strewn about and ordering her Ravagers to kill Shepard and their squad.

Retrieved from "https://masseffect.fandom.com/wiki/Rachni_Queen?oldid=516028"
Community content is available under CC-BY-SA unless otherwise noted.