The Raider is an Outlaw unit. These footsoldiers form the rank and file of non-kett and non-Remnant armies against Pathfinder Ryder and APEX teams.

Human Raiders are invariably male while the Roekaar can be from either gender.


ANALYSIS:
A basic assailant, outfitted with mid- to long-range weaponry. 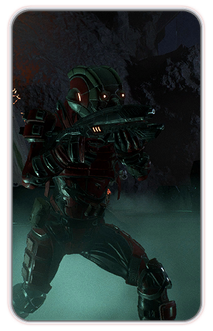 The outlaw bands of the Heleus Cluster are diverse. Some were individuals who joined the Andromeda Initiative as an escape from the Milky Way; some were exiled after the Nexus uprising; others chose to seek their fortune elsewhere. Most of these individuals survive by raiding outposts or wandering exploration teams.

While not particularly organized or well-equipped, these raiders present a risk to undefended colonists. Most prefer to extort supplies and equipment rather than risk themselves, but when provoked or desperate, they will resort to deadly force.

Raiders are unprotected by shields, armor, or barriers.

Retrieved from "https://masseffect.fandom.com/wiki/Raider?oldid=516109"
Community content is available under CC-BY-SA unless otherwise noted.