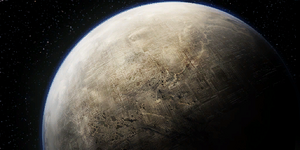 Rakhana is the homeworld of the drell.

Rakhana in the present day is a dry and barren planet covered in rocky deserts. Around the 1380s CE, disastrous industrial expansion began to ruin the planet's sustainability over the next few centuries.

The drell numbered 11 billion at their height, but they lacked the means to escape their homeworld. Fortunately, the hanar made first contact with the drell around the 1980s CE, and over the following decade they evacuated thousands of drell to their own homeworld, Kahje. The remaining billions left on Rakhana gradually perished on their dying planet, warring against each other for diminishing resources.

Rakhana nowadays is a cemetery world, home to only a few thousand drell living in clusters never exceeding a few hundred; during pilgrimage season the population can double.

The drell homeworld of Rakhana once teemed with life, its arid plains home to spectacular insect and reptile analogues. But the drell took to industrialization early and did not realize the extent of the environmental damage they caused until it was too late. With their topsoil depleted and oceans too acidic to sustain life, the drell were situated for a massive population crash by 2025 CE.

It was then the hanar stepped in, mounting a large-scale rescue operation to bring drell to the hanar homeworld, Kahje. As wars erupted over what resources remained on Rakhana and billions began to die, approximately 375,000 drell escaped in the exodus. To repay their debt, the drell entered into an agreement with the hanar. Called the Compact, it states that the drell would assist the hanar with tasks the hanar cannot physically perform. Today, high-ranking hanar are often inseparable from their drell attendants.

Rakhana used to have flowers called usharet - sweet-smelling blossoms with scarlet petals. The flowers are of some cultural significance to the drell; these can be turned into perfumes or used in artfully-designed topiaries.