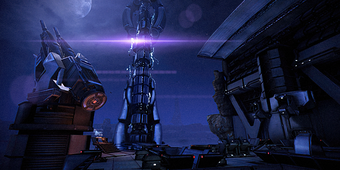 Admiral Raan reports during the dreadnought after-mission debrief how Zaal'Koris sacrificed his ship to destroy a planetary defense cannon, and Shepard offers assistance. To start the mission, orbit Rannoch and select Quarian Escape Pod/Save the Admiral.

In order to complete this mission, you must perform this mission prior to starting Priority: Rannoch as it will not be available afterwards.

As this is an incursion into geth territory, expect lots of shielded synthetics. Powers for subverting them or detonating tech bursts are highly advised. Area effect evolutions for tech burst primers and detonators are also recommended given the closeness of a bunch of enemies at any given time. The geth will also have armored support, but there are effective counters on the base that lessen the need for including armor-stripping capabilities in your squad.

When considering weapon loadouts, the geth facility is favorable to long-distance engagements.

On the shuttle down to Rannoch, Admiral Xen informs you that the Civilian Fleet has taken losses. Without Admiral Koris to guide them, many captains of the Civilian Fleet are planning on breaking from the fleet and risk a run to escape to the Mass Relay. Xen tells you that Koris's escape pod crashed within range of a jamming tower, before communications is cut. Cortez flies towards the pod, but is stopped by the AA Guns. You plan to disable the AA guns on foot and then Cortez can destroy the jamming tower, so you can locate Koris. Cortez lands the shuttle from a short distance from the escape pod.

Proceed along the linear pathway until you come to a crashed quarian escape pod. A Geth Trooper and Geth Pyro will be standing with their backs to you. It is possible to flank them by taking a path to the far right side. It seems too close, but hugging the right side will prevent them from noticing you. A teammate will shout "GETH"; just ignore them and grab the salvage labeled Geth Parts for 2,500 credits while there. After eliminating the hostiles, look for a dead quarian and salvage the wreckage worth 2,500 credits next to the nearby burning debris. Proceed along the trail and be careful; there are multiple Geth Trip Mines on the ground. Pick up the Javelin on the ground next to a trip mine before progressing.

The path leads to the AA Tower where you will be met with oblivious hostiles: three Geth Troopers, two Geth Rocket Troopers. The moment you begin your attack, several more hostiles will drop from the sky. Once you eliminate the hostiles, salvage Geth Technology worth 3,750 credits at the area entrance directly facing the AA Gun Control. Go to the right near the controls and pick up a Geth Spitfire heavy weapon. Tip: You will probably find this heavy weapon difficult to aim against the fast-moving smaller geth, but it will pound down a big slow Geth Prime better than anything else. So you may want to drop it next to you (by switching weapons) at the beginning of the combat, and pick it back up when something big shows up.

Now examine the AA Gun Control and choose one of your squad members to take the AA guns offline. You must defend the position from a wave of geth hostiles including a Geth Prime. Once the hostiles have been eliminated, your squad member will notify you that the AA guns are offline, but watch out: a second wave of geth hostiles including two cloaked Geth Hunters will approach your position. Eliminate all hostiles and proceed up the hill grabbing the Assault Rifle Magazine Upgrade and med kit on the left (before the ridge you must cover-climb to get over).

Watchout for a proximity mine. You will come to a clearing with several disabled geth. Pick up a Shotgun Shredder Mod to the left and salvage the Geth Parts for 3,750 credits. Move through the clearing and talk to Dorn'Hazt, a mortally wounded quarian who served on Admiral Koris' ship. Dorn'Hazt reveals that the political situation on the Migrant Fleet is fractious: the Civilian Fleet of the Flotilla did not want to go to war with the geth, and without Admiral Koris guiding them, the civilians may flee the battle. He then directs Shepard toward Koris' location. Continue along the path to the tower picking up the SMG Magazine Upgrade on the way. You can choose to either go left or right at a fork, but the encounter is the same on either side (this walkthrough assumes the right-hand path).

Move along the path to the right and you will encounter several geth hostiles and a stationary turret. Eliminate all hostiles and move up to examine the AA Gun Control. Near the AA Gun Control is a piece of Armax Arsenal Chestplate. Choose a squadmate to disable the gun. Quickly double back to the station turret and utilize it against an incoming wave of hostiles, which includes another Geth Prime. Tip: The mounted turret is easier to turn and follow targets with if you do NOT utilize the zoom-to-aim feature. 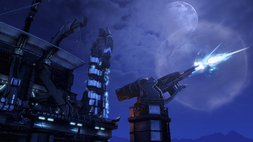 Once all hostiles have been eliminated, a door to the right of the turret leading to the other AA Gun will open. More hostiles will be waiting inside the hallway and around the AA Gun. Eliminate them and before proceeding to the AA Gun Control, head to the left from the hallway exit and at the first highlighted terminal, retrieve the Jamming Tower Data.

Now proceed to examine the AA Gun Control. Choose a squad member to disable the gun, and run back to the stationary turret, as the sooner you get there the less likely you are to be flanked. Defend the area from a wave of geth hostiles - note that on higher difficulties this assault is more numerous than the first turret defense and more likely to quickly flank and endanger your position at the turret: if this happens just pull back to cover nearer the controls. Once all hostiles have been eliminated, your squad mate will notify you that the gun is offline.

Shepard's squad will then board a shuttle and proceed to contact Admiral Koris, who is engaged in a heavy firefight. He refuses to be saved, telling Shepard to rescue his crew. With sufficient Reputation, however, he can be persuaded to be picked up instead of sacrificing himself. Letting Koris die is costly: Admiral Koris' leadership is lost and, if the quarians survive the entire ordeal, their Civilian Fleet panics without him.

Whatever your choice, you will mount a turret inside the shuttle and provide cover fire for whoever you are rescuing. Though it seems as if the geth are firing at your chosen target, they are in fact aiming for your shuttle; you must either destroy the Rocket Troopers or the missiles they launch in order to survive long enough to evacuate your target. Once that party makes it to the shuttle safely, your mission concludes and you will be given 12,500 credits.

Upon completing the mission with Zaal'Koris alive, you will receive this email: