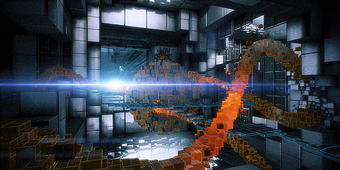 This mission is shown on the planet as "Shut Down Geth Server", and must be completed prior to starting Priority: Rannoch, as it will not be available afterwards. It is quite easy, involving only puzzles and no actual fighting. It also awards you two Intel Terminal upgrades simply for completing it. Although you are asked to select squadmates for this mission, they do not really participate in the mission, they only talk during cut scenes. 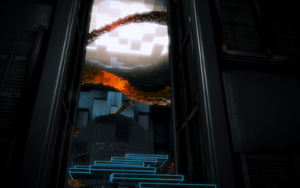 After the cutscene, you will exit the interface pod to find yourself inside the Geth Consensus. Follow the path that appears as you move forward and you will find Reaper code infections, shown as yellow-orange trails, obstructing you. This will also make the steps that are supposed to appear for you glow red. To proceed, you must destroy the trails using your "gun" and its "ammo", which will be fully replenished after a brief cooldown. Disrupt the obstructing infections as you make your way to the first access point. Enter the first access point, and in a flash of light you will be transported to the next portion of the Geth Consensus. You will be told that your access is denied and you must investigate further.

After exiting the access point, you are notified of data clusters containing infected code which you need to disrupt to access it. Shoot your way through the first barrier showing up, then search the trail to your left; a small section of the orange tendrils to the left of the trail with orange data fragments floating around the solid code contains Reaper Code Fragments which you can retrieve and give to an asari looking for them. The data tendril cannot be destroyed, nor can the data fragments, however it can be interacted with (like a terminal or data pad) to obtain the code fragments. It is very easy to miss.

Proceed to disrupt the infection of the data clusters which takes the form of a large rounded object. Once you complete the task, the infection enveloping the data disappears and a historical video data will be played (on the PC you may need to hit 'V' to make the video play). Playing the video will give you the Intel for Improved Geth Resistors. A new path will be revealed which leads to the next data cluster. As before, repeat the disruption process and another video is played after you are done clearing the infection. Finally, proceed to the third data cluster, but just sit back and watch the video since this data cluster is uninfected. Once the video data ends, enter the access point revealed in front of you.

As the scene switches over to reality, a short cutscene shows one of your team members is being contacted by Admiral Raan, notifying that half of the geth fighters in pursuit stopped functioning, most likely due to the actions taken by you.

Back in the virtual world, you are informed that the Reaper code has adapted and can now self-replicate. If you attempt to disrupt the infection in front of you, it will restore itself. Thus, you need to search along the code trail and target its vulnerable point which is just above you. Disrupt the infection to continue. 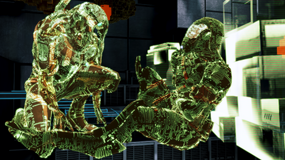 As you proceed further, you will find another data cluster. Similarly, you need to search for a vulnerability along the infection trails before you can disrupt the self-replicating code. Once you have cleared all infections, the data cluster reveals another video recording. Watching this video gives you the Miniaturized Armor Capacitors Intel. Finally, head to the last data cluster and repeat the same process; the only difference here is the self-replicating code has either one or two vulnerable points. Search for them thoroughly. Again, a video data will be played after clearing the infection. Head to the next access point.

If Legion was activated in Mass Effect 2, another video data depicts Shepard's first encounter with Legion. This scene will not occur if the Geth VI is present. The access point will be activated after the video ends. You will be shown with another cutscene showing the rest of the geth squadron stopped functioning when Shepard steps into the access point.

As you come out of the access point, head towards to the exit pod across of you. Once Shepard's back to reality, a dozen or so Geth Primes exit their pods as well, surrounding your squad. They do not attack, but volunteer to join you in the fight against the Reapers instead.

Completing this mission gives you 12,500 credits and adds Geth Prime Platoon to your War Assets.