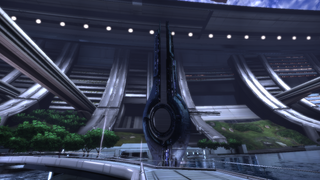 The Relay Monument, a scale representation of a mass relay, is a statue that can be found on the Citadel Presidium. It is believed to be a piece of Prothean art, and has been in place since before the asari arrived on the station.

According to Avina, the Relay Monument is a popular topic of discussion for Citadel academics and scholars. There are two theories behind its meaning. The Monument may have been a gesture of Prothean vanity, proclaiming their galaxy-wide mastery of mass effect field technology. Or, the Monument may be a symbol of unity, an acknowledgement that the mass relays would eventually lead other races to the Citadel and unite them.

If spoken to nearby, Commander Shepard's squad all have their own opinions on the Monument. 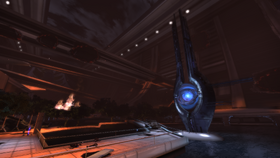 In fact, the Monument is not a statue, but an actual small-scale mass relay that is currently inactive. Its partner relay, known as the Conduit, is on Ilos. Together they create a 'back door' onto the Citadel, which hidden Prothean scientists who survived their race's annihilation used to circumvent the signal the Reapers use to control the Citadel, in scant hopes that it would lead to the cycle of reaping being broken for the next races.

Two years after Saren's invasion, the Monument is still on the Presidium and is now referred to as the Conduit by the Presidium Groundskeeper.

Retrieved from "https://masseffect.fandom.com/wiki/Relay_Monument?oldid=475714"
Community content is available under CC-BY-SA unless otherwise noted.