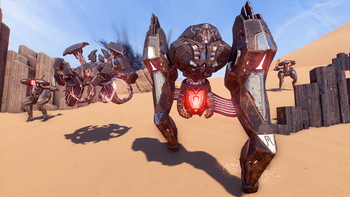 The Remnant are a synthetic race encountered by the Andromeda Initiative in the Andromeda galaxy. "Remnant" is an umbrella term that refers to the autonomous machines, the structures they're commonly found guarding, and the underlying technology common to their construction. The Heleus Cluster is dotted with Remnant sites and technology, most of which are inactive and yet to fulfill the purpose set by their equally mysterious creators.

Most of the known Remnant ground units are named by Pelessaria B'Sayle according to their observed behavior and colored by her personal quirks. The term "Remnant" itself comes from her belief that the synthetics are remnants of something much bigger, only shortened to her liking. 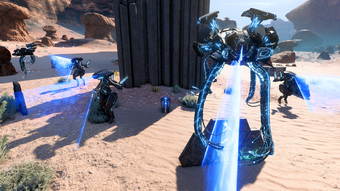 The Remnant machines come in many forms, none of which are humanoid but nonetheless suited for their intended function. They are typically bulky machines, with the smallest the size of a large pet and the basic units about the size of a small human.

Most of the walkers feature jumpjets on their legs that allow them to traverse elevated terrain. The floaters typically have element zero cores to help them levitate. The bots "bleed" a glowing bluish fluid when shot. On standby, their circuitry patterns glow blue and some may even emit scanning fields from time to time. On detecting non-Remnant, their circuitry patterns turn red and they become hostile until the target is dead or out of range.

The bots only have rudimentary programming and are not sapient. However, some units do employ lossless memory partitioning tricks that may be of use to future artificial intelligence designs.

The Remnant were created by an advanced species possibly native to the Heleus Cluster known as the Jardaan. After some sort of conflict that unleashed the Scourge in Heleus, the Jardaan left the cluster and have not returned since.

Remnant structures found on Habitat 7 have been dated to 300-400 years old, meaning they were constructed during the Initiative's journey to the Heleus Cluster. Carbon dating on the vault structure at Eos indicates the vault went dormant at about a similar time period.

While investigating the vault on Eos, Pathfinder Ryder theorized that the Remnant may have been attempting to terraform the Heleus Cluster. The theory was proven correct when after the vault's activation, irradiated Eos quickly became tolerable for human settlement. Vaults in other worlds can similarly be reactivated by the Pathfinder, improving their colonization viability.

The Archon, leader of the kett force invading the cluster, developed an obsession with the tech believing it would grant him uncontested power over his peers, and thus took over numerous Remnant sites and artifacts for study at the cost of stalling the actual invasion. He has located "Meridian", a place he believed to be key to mastering the Remnant.

Further discoveries reveal it was only the command core for the actual Meridian. Through exploiting Ryder's sibling's connection to SAM, the Archon found and almost managed to subvert Meridian to his will, although the Pathfinder team dealt with him shortly and used Meridian to resume terraforming the entire cluster.

While the origins and general purpose of the Remnant were made clear by the time of the Archon's defeat, several facets of their behavior remained unexplained to Initiative scientists, such as several ships docking with Meridian then going off to destroy themselves at the Scourge.

As the bots themselves are not sapient, they have no culture to speak of other than following their programmed directives.

Most Remnant technology is found in a "standby" state, requiring an interfacing element composed of an organic mind and an artificial intelligence to activate. Some of the native angara have a natural ability to interface with Remnant tech, although without an AI their skill is severely limited and may require a lifetime of practice for even the simplest commands.

A defining look of Remnant technology is glowing green circuitboard patterns amid angular metallic exteriors, even in places where there are no obvious sources of power.

The massive Remnant structures on many worlds appear to be terraforming mechanisms with planet-wide effect capability. As deciphered glyphs found within the Eos vault shows, terms such as "atmospheric control" show up. Initiative scientists believe that, if it works as intended, it can modify almost all aspects of a planet. As evidence, after the Pathfinder team "rebooted" the main controls in Eos, the storm that plagued the initial settlement efforts was gone, allowing for the third try to become successful.

The Scourge is aggressively attracted to Remnant tech, and actually caused the initial shutdown of all terraforming efforts within the cluster.

Thus far there's no spoken language found with the Remnant, only indecipherable machine beeps and a "written" language in the form of glyphs. Such glyphs contain immense amounts of information encoded in a single symbol. Collection of the glyphs in the field plus other research materials recovered by the Pathfinder team allows SAM to provide partial translations if and when needed.

Some Remnant tech are secured with a decryption grid. Unlocking them requires scanning the correct Remnant glyphs and arranging them in a specific order. Remnant Decryption Keys are items that can be used to bypass some of the decryption grids.

Remnant ground forces are mostly maintenance drones that can double as intruder repellants whenever the need arises, although they still have dedicated weapons platforms such as the Destroyer. The basic units are deployed en masse and treated as expendable.

The Remnant also field starships ranging from personal fighter-sized vessels to gargantuan structures comparable to dreadnoughts. The smaller craft have a sleek design while the larger vessels look like inverted pyramids.

Remnant bots mostly rely on in-built weapons, although one component that can freeze enemies can be adapted by an omni-tool into the Remnant Cryo-Gauntlet.