View source
watch 02:19
Wiki Targeted (Games)
Do you like this video?
Play Sound
This article or section is a stub. You can help Mass Effect Wiki by expanding it. 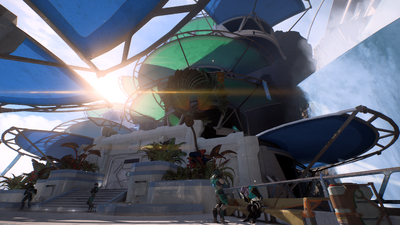 The Resistance Headquarters on Aya is the Angaran Resistance's main base of operations. It coordinates the various Resistance efforts throughout the Heleus Cluster.

The headquarters is located furthest east from the capital city's Docks. To its immediate west is the Repository of History.

Several armed guards are posted near entrances. Northeast from the main entrance leads to Resistance leader Evfra de Tershaav's office. Southeast leads downstairs to the Infirmary and an underground training facility. Overseen by a hardnosed Resistance Captain, the training facility is where Resistance members test their combat mettle against themselves or holographic enemies. Quartermaster Istaal sells items from this place, and Cora Harper often loiters here to observe the drills.

Lining the hallways of the headquarters are numerous terminals, often with an angara working on them. Evfra's own chambers has a gigantic viewscreen and staffed with more operations personnel. It is built in such a way that the northern Aya landscape as well as the training facility can be viewed from here.

Outside the headquarters proper, the nearby Holographic Message Terminal and fast travel station aren't technically counted as part of the headquarters, but they are for some purposes.