Corporal Richard L. Jenkins is an Alliance Marine under the command of Captain Anderson, and a member of the SSV Normandy's crew.

Jenkins was born in a rural district of Eden Prime, and dreamed of visiting more urban areas before he decided to become a Marine, stating that "even paradise gets boring." After enlisting, he wanted to prove himself as a notable soldier and test himself in combat.

Jenkins envies Commander Shepard's impressive record. He also admires the Spectres, though his views of them seem to be coloured more by vids than by experience. He is especially impressed by Nihlus Kryik, after hearing the story that Nihlus once defeated an entire platoon single-handed.

Jenkins is assigned to Shepard's ground team during a mission to Eden Prime. He is killed by geth drones soon after the ground team lands on the surface. His death is a blow to the morale of the Normandy's crew, who would remember him for his bold exuberance.

Two years after his death, Jenkins is remembered by Doctor Chakwas during a drinking session with Shepard. The doctor recounts a story in which Jenkins was thrown back by a "biotic display" from Kaidan. Chakwas was worried that Jenkins broke his back until he jumped up and shouted "That was awesome!"

Jenkins was one of the reasons Doctor Chakwas considers the Alliance great, compared to her and Shepard's current sponsor Cerberus.

In 2186, the Normandy SR-2 obtains a memorial wall inscribed with the names of fallen crew members who served on the SR-2 and her predecessor, the SSV Normandy SR-1. Jenkins' name is included.

If Shepard revisits Eden Prime, while landing on the planet the Commander and some of their squadmates may briefly recall Jenkins and the way he met his end on his birth world. 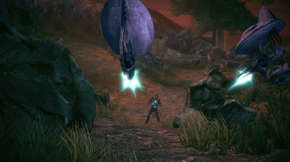