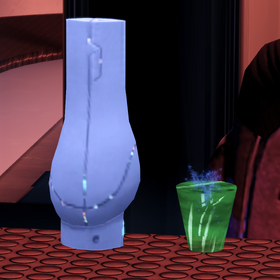 Ryncol is an extremely potent liquor created by the krogan. Its exact composition is unknown, but it is clearly a very strong drink, given that it is created by and for the krogan. Grunt comments that ryncol "hits aliens like ground glass."

Humans can survive drinking ryncol, although it is apparently unsafe for volus. One obtainable datapad contains a complaint made by a pirate about how the YMIR Mech he purchased "leaks [fuel] like a volus after a mug of ryncol."

When Commander Shepard visits the Dark Star Lounge and asks the bartender for five consecutive drinks, the Commander will be given a glass of ryncol. The bartender jokes that Shepard will "set off radiological alarms" after they drink it.

Elcor and quarians can also survive drinking ryncol, although in case of the latter one must take immuno-supplements and anti-virals for weeks before attempting even one shot. In quarians it apparently makes them feel like "stained glass", and feels like "sipping knives" during the act itself. However, ancient quarians were capable of imbibing ryncol without issue since their immune systems weren't ruined yet by Migrant Fleet living.

Ryncol apparently has "pure" and cocktail variants. It can be sold in 190 proof bottles. The turian bartender in the Dark Star Lounge creates a green ryncol mix served to Shepard by mixing separate components together. As per his prediction, it does indeed knock Shepard out, leading to a short sequence where the Commander groggily wakes up on the floor of the Dark Star's bathroom. In Jack's opinion, Shepard's stash of creme de menthe in the Personal Apartment can sicken people more than a sample of pure ryncol.

Ryncol is also highly flammable: while on Silversun Strip, Grunt narrates to Shepard that he in fact used it as a Molotov cocktail merely by throwing a regular bottle at a C-Sec aircar.

Ryncol is highly acidic, capable of melting through machinery. Vomit from ryncol consumption is apparently purplish in color.

Retrieved from "https://masseffect.fandom.com/wiki/Ryncol?oldid=521950"
Community content is available under CC-BY-SA unless otherwise noted.