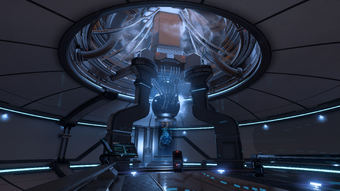 The SAM Node is a location aboard the Hyperion that houses SAM's artificial intelligence bluebox and constituent hardware.

SAM's "brain" is located in the ark's Habitation Deck, next to Alec Ryder's personal quarters.

The room itself is circular and unadorned. A walkway from the only entrance ends at the center of the room, which contains two support columns, a few computer panels, a cylindrical tube displaying SAM's visual representation, and an interface to talk to him. SAM's display tube is connected to intricate overhead machinery amid a smattering of pipes and wafting vapors.

SAM-E, a partition of SAM implanted in Cora Harper, used some of the same processors in the room to save energy. He actively messed around with room's temperature settings one time to alert people who can bail Cora out of trouble.

Prior to the Initiative's launch toward Andromeda, the SAM Node was almost destroyed by a terrorist bombing. A shuttle secretly armed with a plasma bomb detonated in the hangar above the chamber. Because the room wasn't heavily shielded due to budget considerations, the wreckage of the shuttle melted through it, narrowly missing the central column. Amid the blazing inferno of the room, Alec managed to save the fruits of his AI research into heavy-duty storage units before passing out and being saved himself by Cora.

SAM Node was roped off with holo-tape and labeled an active investigation scene during the rebuilding aftermath. SAM had been unspooled back into the room's hardware, albeit forced to route through alternative processors for a while. Cora visited one time and kissed a node in one of the undamaged processor-walls, fulfilling the promise she made to SAM-E when he saved her life earlier.

Pathfinder Ryder wakes up in SAM Node after their mission to Habitat 7, where they learn that their father Alec has died and the mantle of Pathfinder passed on to them.

Later, before going out to rehabilitate Eos, SAM summons Ryder to his chamber to discuss his true nature and the encrypted memories Alec left behind. The Pathfinder can view these memories here once they become available through further progression.

If Ryder retrieved the Ancient AI from Voeld and sent her to the Initiative, she can be seen (and interacted with) on SAM Node attached to one of the support columns.

After the discovery of Meridian, Ryder is incapacitated by the Archon. It turns out the kett have boarded Hyperion and their leader personally appeared at the SAM Node to sever SAM's connection to the Pathfinder. It is later restored by the Pathfinder's twin, although they're captured in the process. Their connection to SAM via their own implant is used by the Archon on Meridian in an attempt to master Remnant technology.

Retrieved from "https://masseffect.fandom.com/wiki/SAM_Node?oldid=519024"
Community content is available under CC-BY-SA unless otherwise noted.