Although the same locker is apparently stocked (the other three are non-interactive), there is a separate locker stocked for the Citadel and each of the mission worlds. Therefore Shepard can return to a mission world later to pick up gear when he is of a higher level. For example, if Shepard lands on Noveria but leaves immediately without performing any missions, the "Noveria locker" is available, but the gear need not be taken. Shepard can then go to Feros, and a "Feros locker" is made available although it is the same interactive locker in the Quarters. Shepard can take the gear while at Feros, then go back to again to Noveria and pick up gear from his locker again.

The gear in the Citadel version of the locker does NOT increase in level even if Shepard does. 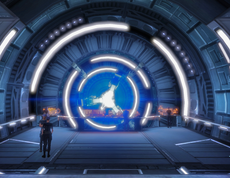 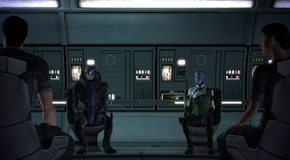 Retrieved from "https://masseffect.fandom.com/wiki/SSV_Normandy?oldid=435048"
Community content is available under CC-BY-SA unless otherwise noted.