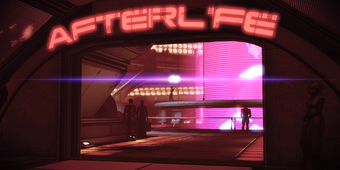 Samara's daughter Morinth suffers a rare genetic defect that allows her to destroy her partner's mind during sex. Samara has a good lead on Morinth's whereabouts and wants to end her daughter's career of serial sex-murder.

After several personal conversations with Samara, Kelly Chambers will relay that Samara wishes to speak to Commander Shepard.

Like Thane's loyalty mission, this is a "no combat" mission, and as such provides substantial experience, cash, and other rewards with no risk. Thus it can be beneficial to complete soon after receiving it. However, a unique ending to this mission is locked behind one of the most demanding Paragon/Renegade checks in the game, meaning it can be advisable to undertake this mission only after completing others and acquiring as many morality points as possible. For efficiency, this mission can be combined with finishing up late-game assignments from Aria and Ish, and cleaning any last upgrades out of the stores.

Note: For the last half of this mission Shepard will be shown wearing the selected casual outfit. If you want to "dress for the occasion," choose your preferred look before leaving the Normandy. It is possible to return to the ship after starting the mission but not after Shepard enters the VIP section of Afterlife. 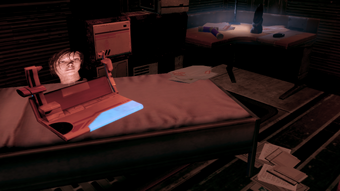 Samara tells Shepard that the person she has been hunting for the past 400 years is on Omega. She reveals that her target is her own daughter, Morinth. Morinth is an Ardat-Yakshi, an asari with a rare genetic disorder that causes her mates to die during sex.

Once on Omega, EDI informs Shepard that she is unable to discern any pattern in the deaths on Omega that would point to an Ardat-Yakshi. She advises Shepard to seek out Aria T'Loak who could possibly have information. Aria says the Ardat-Yakshi's last victim, a young human woman named Nef, stayed in the apartments nearby.

The apartments are close to the entrance to the quarantine zone for the Dossier: The Professor mission. Shepard finds Nef's mother, Diana, grieving there. Morality points may be earned in the conversation with Diana. She gives permission for Shepard to search Nef's room for clues.

Inside there is a note, a diary with 3 entries to listen to, and a statue to examine. You learn that Morinth likes the elcor artist Forta, the vid Vaenia, the drug Hallex, and that the password for the VIP section of Afterlife is Jaruut's name. You and Samara agree on a plan to use yourself as bait to lure Morinth into a trap. 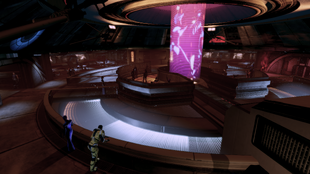 Travel to the VIP section of Afterlife (near the Omega Market) and use Jaruut's name to get in. Samara and Shepard then review their plans to trap Morinth.

Near the club entrance is the human male Vij, looking for tickets for a band named Expel 10, in hopes of impressing an asari. If you want, tell him to lay off for Renegade points. Shepard can then interact with the people in the club to attract Morinth's attention.

After three successful activities, Morinth will ask you to join her, so you cannot do them all. Warning: Somehow failing to make an impression on at least four activities will result in complete mission failure. You're alive, but Morinth will have left, and Samara's loyalty remains unsecured for the rest of the game.

These are the activities:

To maximize morality points, the player should Intimidate the krogan Verf, Charm the bartender Edwin for a round of drinks on the house, and finally, intimidate the would-be muggers Vertin and Huck.

Once her attention has been piqued, Morinth takes Shepard to her booth for a personal chat. If Shepard is confident, expresses a desire for violence, and uses the clues previously learned, Morinth will invite Shepard to her apartment. Specifically, Shepard should start with the "I'm confident" option, and then in any order speak of: 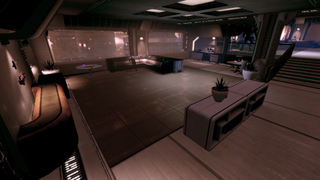 Note: Avoid speaking of family and justicars, as this links to Samara and thus cannot be used as conversation points. Using either Paragon or Renegade conversation options during your talk with Morinth helps to ensure success, but is not required if you follow the above conversation paths. If you choose the moral replies instead, a Charm option will be required to avoid losing her interest on Travel and the Art topics and an Intimidate for Drugs; however, for each of the three topics, one of the non-journal entries will be a failure and will lessen Morinth's interest. If you do not successfully convince her, she will leave and you will fail the loyalty mission.

When you have Morinth's complete attention, she offers to take you to her apartment. Shepard can examine various items in Morinth's room: 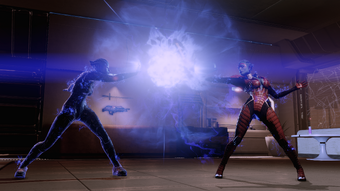 Whenever you're ready, engage Morinth in conversation. The first two dialogue choices do not matter. For the third dialogue choice, Shepard can use Charm or Intimidate to resist Morinth's seduction. Note that this has an extremely demanding Charm/Intimidate check: to pass it you will need to have gained almost all the paragon or renegade points available to you in missions you have completed to date.

The jig is up and Samara enters the room. She and Morinth have a biotic battle, but they are evenly matched. If the Commander was able to resist Morinth earlier, Shepard can choose whether to assist Samara or Morinth, and will receive big dose of morality points in one direction or another. If the Commander was not able to resist Morinth before, then Shepard automatically helps Samara and does not receive any morality points.

If Morinth is killed, Samara becomes loyal and her Reave power is unlocked.

If Samara is killed, Morinth disguises herself and assumes the place of her mother, so that no one else on Normandy is aware of Samara's death and Morinth's substitution. Morinth is automatically loyal and has the Dominate power.

If Samara was killed, Morinth sends Shepard an e-mail at some point in Mass Effect 3. During Priority: Earth she appears as an enemy, having been turned into a Banshee by the Reapers.

If Morinth was killed and Samara subsequently survives the Suicide Mission, she will appear during Kallini: Ardat-Yakshi Monastery and can become a war asset.

Morinth/Samara Killed: Samara has dealt with the Ardat-Yakshi. She remains loyal to Shepard personally. Loyalty of the justicar beyond question, given apparent bonds of oath rendered to Shepard. Better than hoped. Cerberus activities will not be affected further by presence of Shepard's team.

Relieved to have justicar's mission completed. Unfortunately, body of Ardat-Yakshi could not be taken for study. Genetic abnormality could have been useful. Subject's expertise would have made her a valuable team member if sociopathic tendencies were mitigated.

Morinth Escapes: Samara failed to apprehend her target. This distraction leaves her emotionally vulnerable and could threaten the mission, but I see no way of dealing with the situation. Cerberus operatives have had no success tracking Morinth. We'll have to hope the justicar's oath keeps her mind on the mission.

Retrieved from "https://masseffect.fandom.com/wiki/Samara:_The_Ardat-Yakshi?oldid=520190"
Community content is available under CC-BY-SA unless otherwise noted.