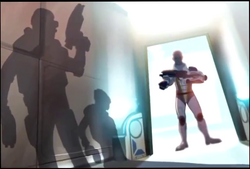 Batarian terrorists have attacked the Arcturian Jade, the cruise vessel where you were vacationing. You fought your way to the ship's bridge to confront the leader of the terrorist cell.

Defeat the terrorists' leader to end the batarians' reign of terror!

After a short sequence introducing the plot regarding the peace talks negociation between humans and batarians, the cinematic shows the attack on the luxury cruiser, the Arcturian Jade. At the end of the introduction, Jacob grab his rifle and engage the invaders. On this first combat zone of the game, you will only encounter two weak terrorists. 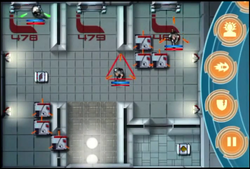 After this quick fight, you will run into the porter of the cruiser and start your first discussion of the game. The porter is freaked out by the attack and wants to hide. Before to leave, he will also warn you that the batarian were probably looking for the bridge of the Arcturian Jade and that it is the place to go to stop them. You will then fight your way to the bridge by eliminating enemy forces on three different deck. In those combat zone you will mostly face simple Terrorists but also some Terrorist Elites. Do not hesitate to use your powers against these stronger enemies.

When you reach the bridge of the cruiser, you will be able to start a talk with the Terrorist Leader. during the discussion you can speak peacefully or not. However, in both case, the terrorist leader will attack you. It will then launch the last combat zone of the mission where you will face the leader protected by a simple terrorist and an elite terrorist. 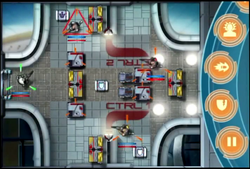 After the fight a short dialogue with Reginald Tudge, the Captain of the Arcturian Jade, will occur. He will be thankful because you saved his life and his cruiser from those dangerous batarians. After that the captain will inform Jacob that they are heading to the Citadel.

Retrieved from "https://masseffect.fandom.com/wiki/Save_the_Arcturian_Jade?oldid=436201"
Community content is available under CC-BY-SA unless otherwise noted.