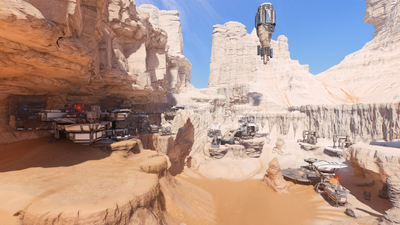 Misery is a flophouse populated by the most violent scavengers on Elaaden. The hardscrabble life on the world means anyone here is willing to kill just for a place to sleep.

The place is a collection of shacks nestled in a rockhouse to protect it against the sun. Tall rock faces form a U-shaped natural deterrent to the east, as to the west is a low-level approach where would-be invaders can be easily seen from afar. Opposite the shacks is a small cave system suitable for hiding dangerous tech. If Misery does come under attack, alarm systems ensure a steady stream of reinforcements unless silenced.

The flophouse is surrounded by Languish to the north, Gehenna Valley to the east, and Paradise Sands to the west and south. Its position allows its denizens to maraud other scavengers with ease, earning Misery enough of an ugly reputation that the Andromeda Initiative considers neutralizing its threat a criterion in attempting to make Elaaden more livable. Most people tend to steer clear of the flophouse scavengers whenever possible, although there are few exceptions to their predations like the water mechanic Sjaan.

Before the scavengers took it over, it is speculated that Misery used to be one of the Initiative's failed mining outposts. The Berserker Strogjaw Grog and his cronies currently control the region unless Pathfinder Ryder intervenes.

Retrieved from "https://masseffect.fandom.com/wiki/Scavenger_Flophouse_(%22Misery%22)?oldid=516919"
Community content is available under CC-BY-SA unless otherwise noted.