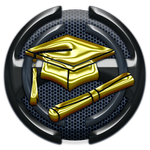 For a complete list of all Codex entries and how to get them, see Codex Entry Guide.

The Scholar achievement is one of the easiest achievements to unlock. However it does require you to interact with characters that become unavailable later in the game.

To complete the achievement you will need to find the following subjects:

Full credit to Armando Castillo for his guide available from GameFAQ's

In some cases for 360 players, the Scholar achievement doesn't register as a pop-up when achieved. Check your Achievements list if you believe you've discovered all the required Codex entries.

It has also been reported that some players haven't received the Scholar achievement despite getting all the entries.

Prothean → Talk to Nihlus during your conversation with him and Captain Anderson aboard the ship just before Eden Prime.

Geth → Talk to Ashley when you first meet her.

Volus → As soon as you are on the Citadel go to the Presidium. In the Embassies, find the volus and elcor office and talk to ambassador Din Korlack.

Rachni → Talk to Avina, next to the krogan statue. This completes the Aliens: Extinct Races.

Hanar → Talk to Delan, the hanar shopkeeper in the Emporium.

Keepers → Talk to Avina next to the keeper.

Use Citadel Rapid Transport to go to the Citadel Tower

Salarians → Go to the hearing.

Turians → Go to the hearing.

Asari → Go to the hearing. This Completes the Aliens: Council Races in the Codex.

Krogan → Do the mission to get Wrex into your crew.

Quarians → Talk to Wrex in C-sec.

Batarians → Talk to Captain Anderson about past mission with Saren.