View source
watch 02:46
The Quarry - The Loop
Do you like this video?
Play Sound
This article or section is a stub. You can help Mass Effect Wiki by expanding it. 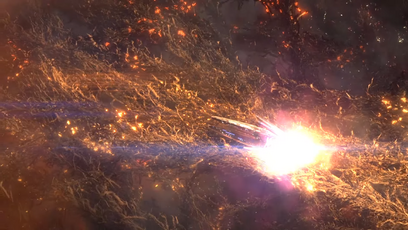 The Scourge is a widespread energy phenomenon discovered by the Andromeda Initiative in the Heleus Cluster of the Andromeda galaxy. It defies understanding by contemporary science, and is described as a "dark energy cloud" or "charged absence". Speculation about the nature of the Scourge usually ties it to dark energy, yet the Scourge does not behave in the way that existing theories on dark energy say that it would. Element Zero can be harvested from the Scourge, but only at great expense as the Scourge catastrophically interferes with the function of most technology. The Scourge is associated in some way with Remnant structures and has severely damaged the environments of the planets classified as golden worlds by the Initiative.

It is revealed that the Scourge was released into the Heleus Cluster centuries ago after the detonation of a powerful weapon on a Remnant space station, during a conflict involving the race known as the Jardaan, the creators of the Remnant. The "Opposition" – the term SAM translated for the Scourge's detonators – learned their secrets from an entity called "Jheln".