Seeker Swarms are technological devices used by the Collectors. They have the appearance of large light-brown insects, deployed in swarms from Collector ships. Once released, the Swarms seek organic targets and sting them, leaving their prey in a paralytic stasis-like state. This allows the Collectors to disable the populace of entire colonies, whereupon they move in and gather the bodies for transportation. 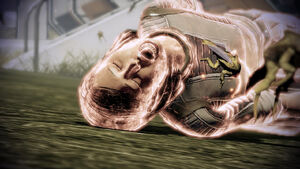 In the aftermath of the Battle of the Citadel, the Collectors deployed Seeker Swarms on human colonies in the Terminus Systems and began abducting their inhabitants. One such planet was Freedom's Progress, where all human colonists were taken. The sole survivor of the attack was a quarian, Veetor'Nara, who was on his Pilgrimage there. Though mentally unbalanced by the encounter, Veetor had managed to record footage and biological data of the Seeker Swarms. He gives this information to Commander Shepard, who had begun working with Cerberus to stop the colony abductions.

After an analysis of the quarian's data, the Illusive Man asked Shepard to find Mordin Solus and solicit his scientific expertise to create a vaccine to repel the paralytic effects of the Seeker Swarms. Mordin later managed to develop an experimental countermeasure that made wearers theoretically invisible to the Swarms. The countermeasure was successfully tested when the Collectors attacked the human colony on Horizon. The countermeasure was unable to provide protection against heavy concentrations of Seekers, however, such as those later encountered by Shepard in the Collector Base, but this was remedied with the use of biotic fields to keep the Swarms at bay. 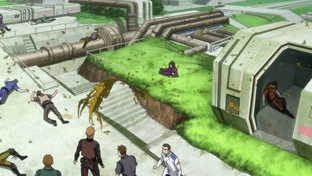 Collectors arrive on Fehl Prime in 2185 to harvest its human population, deploying the swarms as per standard procedure. The creatures easily bypass the colony's newly-installed military-grade kinetic barriers and proceed to stun every human on sight, including three of James Vega's associates: Captain Toni, April, and Christine. Some of the creatures paralyze Vega's squad member Essex, but the human later recovers because of a cure.

Though Shepard encounters no Seeker Swarms in 2186, it is mentioned that during fighting on Palaven, "Collector swarms" were used by the Reapers. It is unknown if this refers to the Seeker Swarms or the Collectors themselves.