Sha'ira (known to many as the Consort) is a well-known and influential asari who works in the Consort's Chambers of the Citadel. She has many famous and powerful clients that see her for a variety of reasons; each person's needs are unique, but Sha'ira always manages to accommodate them.

Sha'ira offers personal services as well as entertainment and conversation, but she is also known for the value of her advice. Her fame causes many people to discuss her, especially in the nearby Embassies; Xeltan, an elcor diplomat, and Private Fredricks of the Alliance both mention Sha'ira. As the bartender at the Embassy Lounge says of Sha'ira, "if you haven't heard of her, you soon will."

In person, Sha'ira is a gentle, discreet, but sensual asari who values her reputation and the happiness of others, and remains a powerful and highly respected figure on the Citadel. She is so popular that it can take months to get an appointment, and a visit to the Consort's Chambers can cost half a year's pay. Sha'ira has many acolytes of various races (mainly asari, including Nelyna, though a human acolyte recently joined them) who tend to the needs of her clients if Sha'ira can't see them. Commander Shepard claims that Sha'ira sounds like an oracle, but Nelyna says Sha'ira is merely a woman, "with remarkable compassion and a generous spirit".

When Shepard arrives on the Citadel, Sha'ira is having trouble with a friend and client named Septimus who has been spreading lies about her. She asks Shepard to help by speaking to him. (If Shepard's romantic interest is in the squad at the time, he or she is a little discomfited when Sha'ira says she gives "advice to some... comfort to others", asking her to explain just why she wanted to see the Commander.)

If Shepard informs Xeltan, the elcor diplomat, that Septimus was responsible for revealing his secrets, she also gives the Commander a mysterious trinket that can be used on Eletania to unlock the secrets of a Prothean ruin.

If Commander Shepard expresses disdain at Sha'ira's gift of words, she will have sex with Shepard before giving the Commander the trinket. 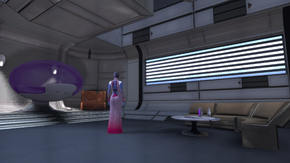 The Consort's Chambers are located on the Citadel Presidium near the financial district. The entrance, where Nelyna greets new arrivals, turns the corner into a lounge where the acolytes see to the needs of clients that Sha'ira doesn't have time to see. A set of stairs at the back leads up to Sha'ira's private rooms.

If Commander Shepard spoke to Septimus on Sha'ira's behalf in 2183, she sends a message to Shepard in 2185.

One of the crew on the Normandy SR-2 has an appointment with Sha'ira in three months, and seems quite excited about the fact. When another member of the crew calls her a prostitute, he objects heavily to the word.

A news report that can be heard indicates that Sha'ira may be leaving the Citadel after "years of bad press and rumors of intelligence leaks." 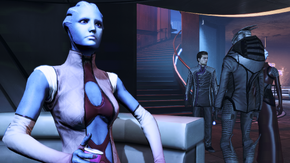 While Shepard is infiltrating the Silver Coast Casino, the Commander can chat with Sha'ira among the guests in the casino floor. During the conversation, it is revealed that Sha'ira did, for a time, leave the Citadel, confirming the earlier aired reports. She retired to a little colony in the Silean Nebula, and returned after the start of the Reaper invasion. She claims one does not flee the heart of the galaxy in desperate times, and certainly not because of "some scoundrel with a video camera."

Sha'ira is flattered if Shepard keeps coming back to her, giving an overview on how someone becomes a consort to sate the Commander's curiosity. Though because she has a potential client to attend to, she makes her explanation brief and excuses herself afterwards.

Retrieved from "https://masseffect.fandom.com/wiki/Sha%27ira?oldid=516638"
Community content is available under CC-BY-SA unless otherwise noted.