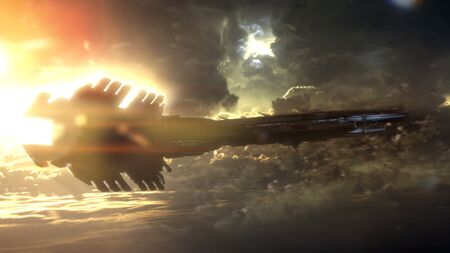 The Shadow Broker Base is a massive ship that travels through the volatile atmosphere of Hagalaz, which conceals its presence. It is from here that the Shadow Broker rules his empire. 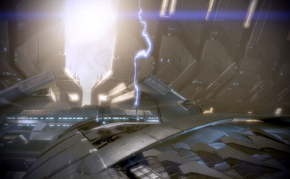 The exterior of the Shadow Broker's ship is a hazardous place. The Shadow Broker's private army patrols the exterior, and Maintenance Drones tend to the hull and the systems on the exterior of the ship. The exterior also has no hand or guardrails making it a dangerous place to patrol. The atmospheric conditions of Hagalaz don't make the process any easier, but the risk of patrols being struck by stray lightning bolts from the omnipresent electrical storms is mitigated by large conducting rods that channel energy into giant hull-mounted capacitors. 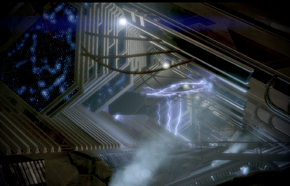 The interior of the ship has many compartments including the ship's engines, which must remain active at all times to prevent it from falling. Also inside is central operations, probably the nerve center of the ship. There is also a prison block where the Shadow Broker keeps hostages, and torture facilities for interrogation purposes. Finally there is the Shadow Broker's Office, Intel Center, and private quarters. Within the private quarters, a custom VI Drone assists the Shadow Broker with maintaining his massive network of informants, contacts, and agents. Despite the ship's volatile location, motion dampeners absorb the noise and vibrations from the storm outside. 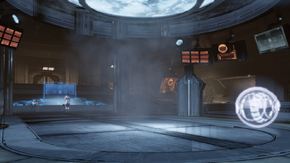 The Advanced Training terminal allows the player to redistribute a squadmate's ability points at a cost of 1000 Element Zero per character.

This is a standard Armor Locker like the one located on the Normandy SR-2, where the player can customize armor and outfits.

Here, the player can receive shipments from the Shadow Broker's contacts. New deliveries are received daily, between missions, or assignments and include upgrades and resources. Possible shipments are listed below.

Note: If you reload the save profile, you can get different items, but you can only get one item per day/mission/assignment. If you wish to expedite the collection of all upgrades, you can do so by changing the date on your PC. Save after a pick up, change the date on your system and then reload the save. It is advisable to use dates in the past, because the game automatically loads the "newest" save game on "Resume" from main menu and Quick-Load, i.e. the save with the latest date. Alternatively, you can just delete these "future" save games after you are done. Or, do it this faster way without waiting to load your game. On the Xbox 360, the date can be changed in the System Settings menu. The same process can be used on the PS3 version, as well.

This terminal contains intelligence files on the squad, several other figures, certain organizations, and the Broker. These files consist of information on these characters' recent activities.

The Info Drone is a specially built VI that assists the Shadow Broker in coordinating the network. It will follow the "Broker" around, as it is programmed to recognize anyone in the room as the Broker, and give them periodic updates about the Galaxy and the people in it.

The Investment Opportunities terminal allows the player to distribute intel to assist people across the galaxy. There is a certain amount of credits needed to invest in these opportunities however.

This is a Research Terminal like the one located on the Normandy SR-2, where the player can examine and purchase upgrades.

On the table next to the survey information terminal, there is a Shadow Broker ship model that you can take.

To the right of the table with the Shadow Broker ship model is a window shutter control, which you can open to see the fast-moving storm clouds.

In the private quarters, just before the Video Archive. Much like the one located on the Normandy SR-2, except it plays various tracks from the Mass Effect 2 Score.

At this terminal, the player can pay a set number of credits to obtain the locations of planets rich in a particular resource. Once this information has been purchased a label will be added to the galaxy map at the location of the designated planet.

Note: No locations are provided if the player has mined all the planets in the game with "Good" or "Rich" resource levels.

At the Video Archives terminal, the player can review archived video clips of people all around the galaxy that the Shadow Broker has been observing.

Sometime prior to the Reaper invasion in 2186, Liara T'Soni learns that the Illusive Man has tracked her down and wants to capture the Shadow Broker Base for Cerberus' own ends. Expecting an attack and knowing that the aging Base is not suited for space travel, Liara and Feron load as much of the Base's information drives and communications equipment aboard a shuttle as they can and escape as Cerberus ships approach. Liara remotely crashes the Shadow Broker Base into a Cerberus cruiser, resulting in the destruction of both ships.

Assorted tech from the remains of the ship can be salvaged and used to aid the construction of the Crucible.

Retrieved from "https://masseffect.fandom.com/wiki/Shadow_Broker_Base?oldid=517096"
Community content is available under CC-BY-SA unless otherwise noted.