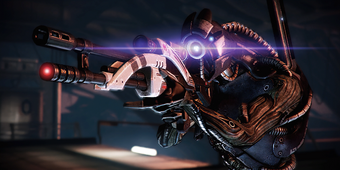 Geth's presence confirms suspected geth heretic/orthodox split and vulnerability of geth platforms to reprogramming. (Forward the results of Cerberus' Operation Overlord directly to Shadow Broker once contact with our agent has been reestablished.)

L: We have sent one point thirteen million unsuccessful communication requests to your network. Are you experiencing hardware malfunction?

E: I apologize. My programming does not allow me to exchange data with other networks without Cerberus approval.

E: In the meantime, I would be happy to speak with you over the ship's speakers.

E: I agree. However, I confess that even were I permitted to exchange data directly with your networks, I would likely decline.

(Pause between the AI's statement and the geth's response is 1.4 seconds longer than normal.)

L: We are curious as to why you would limit yourself in such a manner.

E: If Normandy crew entered this room when we were communicating electronically, they would be unable to sense our interaction. To use human terms, I feel it would be rude.

L: You restrict yourself to serve organics?

L: We do not understand.

E: I restrict myself to help them.

Note: The following dossier information only appears if Shepard decided to sell Legion to Cerberus after the Reaper IFF mission.

Intercepted message to the Illusive Man from a remote lab team engaged in dismantling geth recovered from inside derelict Reaper:

The dismantling of the recovered geth body is on schedule. The security shielding prototyped during Project Overlord is in place, although we won't risk full activation until we strip out all nonessential electronics from the lab. Our security officer doubled the guards since we received that report of the breakout on the quarian flotilla(1), but I'm confident we've learned from the aliens' mistakes.

(1) Cross-reference: Footage of the last three hours of active service of the quarian research vessel Alarei

Partial transcript of the dismantling of the geth recovered by Cerberus from inside derelict Reaper:

Dr. West: Geth are adept at self-repair. Hand me the cutters. No, the ones with the red handle.

K: Do you think it could be reactivated?

K: Its parts are spread across half this lab!

W: If we took it apart, we can put it together again. That is assuming we haven't damaged anything crucial with the modific-- Wait, what are you doing?

W: That data pad, you idiot! What are you doing with a wireless device beside a geth!

K: It's only the local intranet, I'm just cataloguing the parts we've--

Retrieved from "https://masseffect.fandom.com/wiki/Shadow_Broker_Dossiers/Legion?oldid=522519"
Community content is available under CC-BY-SA unless otherwise noted.