The Sharpshooter is an Outlaw unit. Next to Raiders, they are a common staple of enemy formations encountered by Pathfinder Ryder and APEX teams.


ANALYSIS:
A fleet of foot and jetpack long-range assassin, armed with a long-range weapon. 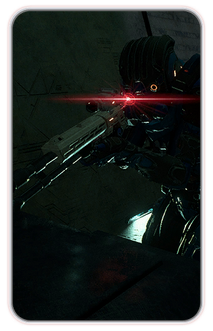 Equipped with custom-modified sniper rifles, sharpshooters accompany raiding parties as scouts and long-range combatants. A well-trained sharpshooter can pick off an unprepared explorer before they even know there are enemies nearby.

The skill of many of these sharpshooters is, ironically, the result of Initiative colonist defense training before leaving the Milky Way. Strategically, it was believed that well-armed snipers would be simple but effective defenders of their outposts, with a lowered risk of losing personnel in the event of an attack. It appears this training has now been passed along.

Human Sharpshooters are armed with M-97 Vipers while Roekaar ones are equipped with Isharays. Both variants can take a few seconds to "paint" a target with a red laser beam, dealing high damage if it hits.

They are protected by shields.

Sharpshooters can hit back with melee attacks in close range, but they prefer to put some distance between them and their attackers.

Retrieved from "https://masseffect.fandom.com/wiki/Sharpshooter?oldid=516112"
Community content is available under CC-BY-SA unless otherwise noted.