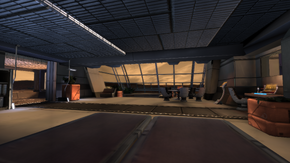 Shepard's Apartment is a building on the Alliance colony world of Intai'sei.

The house originally belonged to Admiral Tadius Ahern, the commander of Pinnacle Station, who requested it dropped on the world for when and if he decided to retire. Since he did not want to retire any time soon, he made a wager with Shepard: his retirement house versus the Commander's life in a unique scenario he programmed into the Station's Combat Simulator.

The scenario recreated one of his missions during the First Contact War. Ahern said that if Shepard died while attempting to complete it, the incident would be logged as "User Error" so he did not have the death of the galaxy's first human Spectre on his hands. Shepard managed to complete the scenario and true to his word, Ahern gave the property over.

The house is a basic prefabricated structure with a small hallway and a large great room making up both the living space and the bedroom. 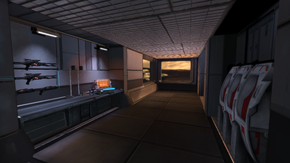 The hallway consists of a Medical Station like the one in the Medbay of the SSV Normandy where Shepard can receive a full resupply of Medi-gel. More unusually it also contains a grenade dispenser that will replenish the Commander's stock of grenades. Finally, it contains a wall of weapons on display, but ready to use, as that is a necessary part of colony life.

The large quarter-sphere window in the main room offers a spectacular view of the planet, the other structures, and the Mako which is parked right outside. The room contains an entertainment screen for playing music, which can be turned on and off. A couple of couches, facing the windows, populate the room as well as plants and various house paraphernalia.

The personal terminal near the bed contains a message for Ahern about getting supplies. Shepard can use the terminal to get access to low, medium, or high grade armor, weapons, and mods for prices a lot cheaper than the stores elsewhere will sell them for, usually. Perhaps even more important than the pricing arrangements, the Commander can obtain some of the finest items in the galaxy using this terminal.

Retrieved from "https://masseffect.fandom.com/wiki/Shepard%27s_Apartment?oldid=522419"
Community content is available under CC-BY-SA unless otherwise noted.